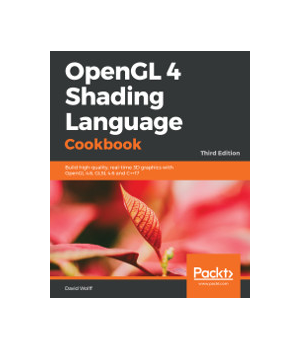 OpenGL 4 Shading Language Cookbook, Third Edition provides easy-to-follow recipes that first walk you through the theory and background behind each technique, and then proceed to showcase and explain the GLSL and OpenGL code needed to implement them.

The book begins by familiarizing you with beginner-level topics such as compiling and linking shader programs, saving and loading shader binaries (including SPIR-V), and using an OpenGL function loader library. We then proceed to cover basic lighting and shading effects. After that, you'll learn to use textures, produce shadows, and use geometry and tessellation shaders. Topics such as particle systems, screen-space ambient occlusion, deferred rendering, depth-based tessellation, and physically based rendering will help you tackle advanced topics.

OpenGL 4 Shading Language Cookbook, Third Edition also covers advanced topics such as shadow techniques (including the two of the most common techniques: shadow maps and shadow volumes). You will learn how to use noise in shaders and how to use compute shaders.

The book provides examples of modern shading techniques that can be used as a starting point for programmers to expand upon to produce modern, interactive, 3D computer-graphics applications.

Portable, powerful, and a breeze to use, Python is the popular open source object-oriented programming language used for both standalone programs and scripting applications. It is now being used by an increasing number of major organizations, including NASA and Google.Updated for Python 2.4, The Python Cookbook, 2nd Edition offers a wealt...

When you're programming C# 4.0 and need a little help, this tightly focused and practical book tells you exactly what you need to know - without long introductions or bloated examples. It's ideal as a succinct quick reference or as a guide to get you rapidly up to speed if you already know Java, C++, or an earlier version of C#. Written b...

Puppet is a configuration management system that automates all your IT configurations, giving you control of what you do to each node, when you do it, and how you do it.Puppet Cookbook Third Edition takes the reader from a basic knowledge of Puppet to a complete and expert understanding of Puppet's latest and most advanced features. Updat...

Want to understand a certain PHP programming technique? Or learn how to accomplish a particular task? This cookbook is the first place to look. With more than 350 code-rich recipes revised for PHP 5.4 and 5.5, this third edition provides updated solutions for generating dynamic web content - everything from using basic data types to query...

With about ten years since its first release, Microsoft's .NET Framework 4.5 is one of the most solid development technologies to create casual, business, or enterprise applications. It has evolved into a very stable framework and solid framework for developing applications, with a solid core, called the CLR (Common Language Runtime) Micr...

Learn how to solve the real problems you face with CSS. This cookbook offers hundreds of practical examples for using CSS to format your web pages, and includes code samples you can use right away. You'll find exactly what you need, from the basics to complex hacks and workarounds.Each recipe explains how to customize a solution to meet y...