Use Angular Universal to pre-render your web pages, improving SEO and application UX 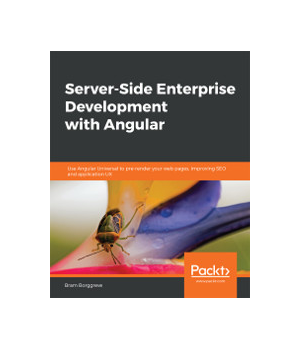 With the help of Server-Side Enterprise Development with Angular, equip yourself with the skills required to create modern, progressive web applications that load quickly and efficiently. This fast-paced book is a great way to learn how to build an effective UX by using the new features of Angular 7 beta, without wasting efforts in searching for referrals.

To start off, you'll install Angular CLI and set up a working environment, followed by learning to distinguish between the container and presentational components. You'll explore advanced concepts such as making requests to a REST API from an Angular application, creating a web server using Node.js and Express, and adding dynamic metadata. You'll also understand how to implement and configure a service worker using Angular PWA and deploy the server-side rendered app to the cloud.

By the end of this book, you'll have developed skills to serve your users views that load instantly, while reaping all the SEO benefits of improved page indexing.

Equip yourself with the skills required to create modern, progressive web applications that load quickly and efficiently. This fast-paced guide to server-side Angular leads you through an example application that uses Angular Universal to render application pages on the server, rather than the client.You'll learn how to serve your users v...

AngularJS is one of the most popular JavaScript frameworks used to write single page applications and is suitable for developing large-scale enterprise applications. With Firebase, you can easily store and sync data in real time. It has libraries for all the major web and mobile platforms (including AngularJS) and bindings for the most po...

This book is about building professional web applications and web services using Swift 4.0 and leveraging two popular Swift web frameworks: Vapor 3.0 and Kitura 2.5. In the first part of this book, we'll focus on the creation of basic web applications from Vapor and Kitura boilerplate projects. As the web apps start out simple, more usefu...

Leverage the benefits of both client-side and server-side rendering to get the most out of your React applications. By the end of this book you will be able to build and deploy React applications using the Next.js framework to fully render server-side HTML on every Web page.You'll begin by reviewing JavaScript fundamentals and how they wo...

Dependency injection facilitates better testing by allowing us to mock dependencies in testing environments so that we only test one thing at a time. It also enables us to write more maintainable code by decoupling our objects from their implementations. The motivation for using it in AngularJS is to make it easier to transparently load m...

A hands on approach to learning Node to equip and guide you in the art of asynchronous server side JavaScript.Packed with practical recipes taking you from the basics to extending Node with your own modules. Create your own web server to see Node's features in action. Work with JSON, XML, web sockets, and make the most of asynchronous pro...