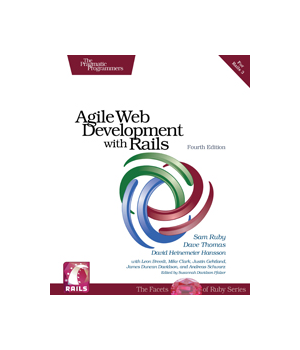 Rails just keeps on changing. Rails 3 and Ruby 1.9 bring hundreds of improvements, including new APIs and substantial performance enhancements. The fourth edition of this award-winning classic has been reorganized and refocused so it's more useful than ever before for developers new to Ruby and Rails.

Rails 3 is a major release the changes aren't just incremental, but structural. So we decided to follow suit. This book isn't just a mild reworking of the previous edition to make it run with the new Rails. Instead, it's a complete refactoring.

You'll still find the Depot example at the front, but you'll also find testing knitted right in. Gone are the long reference chapters that's what the web does best. Instead you'll find more targeted information on all the aspects of Rails that you'll need to be a successful Web developer.

Ruby on Rails helps you produce high-quality, beautiful-looking web applications quickly - you concentrate on creating the application, and Rails takes care of the details. Rails 5.1 brings many improvements, and this edition is updated to cover the new features and changes in best practices.We start with a step-by-step walkthrough of bui...

Rails just keeps on changing. Rails 3 and Ruby 1.9 bring hundreds of improvements, including new APIs and substantial performance enhancements. The fourth edition of this award-winning classic has been reorganized and refocused so it's more useful than ever before for developers new to Ruby and Rails....