Distributed and Parallel Computing with Ruby 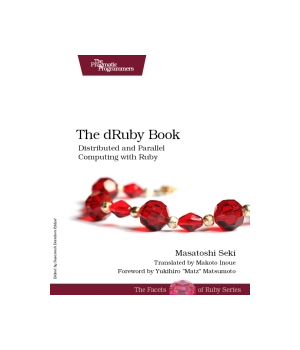 dRuby has been part of the Ruby standard library for more than a decade, yet few know the true power of the gem. Completely written in Ruby, dRuby enables you to communicate between distributed Ruby processes as if there were no boundaries between processes. This is one of the few books that covers distributed and parallel programming for Ruby developers.

The dRuby Book has been completely updated and expanded from its Japanese version, with three new chapters written by Masatoshi-san. You'll find out about the design concepts of the dRuby library, and walk through step-by-step tutorial examples. By building various distributed applications, you'll master distributed programming as well as advanced Ruby techniques such as multithreading, object references, garbage collection, and security. Then you'll graduate to advanced techniques for using dRuby with Masatoshi-san's other libraries, such as eRuby and Rinda - the Ruby version of the Linda distributed tuplespace system. In the three new chapters, you'll see how to integrate dRuby and eRuby, get a thorough grounding in parallel programming concepts with Rinda, and create a full text search system using Drip.

The result of more than a decade of research and development within the NSA, the Ghidra platform was developed to address some of the agency's most challenging reverse-engineering problems. With the open-source release of this formerly restricted tool suite, one of the world's most capable disassemblers and intuitive decompilers...

Behaviour-Driven Development (BDD) gives you the best of Test Driven Development, Domain Driven Design, and Acceptance Test Driven Planning techniques, so you can create better software with self-documenting, executable tests that bring users and developers together with a common language.Get the most out of BDD in Ruby with The RSpec Boo...

The Little Book of Semaphores

One of the main concerns for digital photographers today is asset management: how to file, find, protect, and re-use their photos. The best solutions can be found in The DAM Book, our bestselling guide to managing digital images efficiently and effectively.Anyone who shoots, scans, or stores digital photographs is practicing digital asset...

This practical guide will teach you everything you need to know to quickly become a Twitter power user, including strategies and tactics for using Twitter's 140-character messages as a serious--and effective--way to boost your business. Co-written by Tim O'Reilly and Sarah Milstein, widely followed and highly respected Twitterer...

The Little Book on CoffeeScript

Want to create animated graphics for iPhone, iPad, and the Web, using familiar Adobe features? You've come to the right book. Adobe Edge Animate: The Missing Manual shows you how to build HTML5 graphics with Adobe visual tools. No programming experience? No problem. Adobe Edge Animate writes all of the code for you. With this book, y...

The Pickaxe book, named for the tool on the cover, is the definitive reference to Ruby, a highly-regarded, fully object-oriented programming language. This Second Edition has more than 200 pages of new content, and substantial enhancements to the original, covering all the new and improved language features of Ruby 1.8 and standard librar...