Write Lean Programs for the JVM 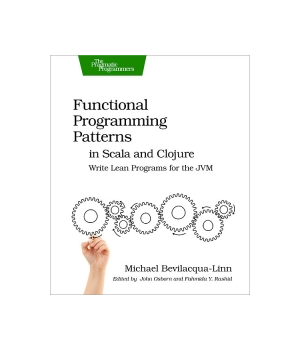 Functional languages have their own patterns that enable you to solve problems with less code than object-oriented programming alone. This book introduces you, the experienced Java programmer, to Scala and Clojure: practical, production-quality languages that run on the JVM and interoperate with existing Java. By using both the statically typed, type-inferred Scala and the dynamically typed, modern Lisp Clojure, you'll gain a broad understanding of functional programming.

Scala is used to construct elegant class hierarchies for maximum code reuse and extensibility and to implement their behavior using higher-order functions. Its functional programming (FP) features are a boon to help you design "easy to reason about" systems to control the growing software complexities. Knowing how and where to a...

Functional programming is on the rise because it lets you write simpler, cleaner code, and its emphasis on immutability makes it ideal for maximizing the benefits of multiple cores and distributed solutions. So far nobody's invented the perfect functional language - each has its unique strengths. In Functional Programming: A PragPub Antho...

This is a fast-paced guide that will help you to write real-world applications by utilizing a wide range of functional techniques and styles.The book first explores the core concepts of functional programming common to all functional languages, with examples of their use in JavaScript. It's followed by a comprehensive roundup of functiona...

This book teaches you how to build and contribute to Scala programs, recognizing common patterns and techniques used with the language. You'll learn how to write concise, functional code with Scala. After an introduction to core concepts, syntax, and writing example applications with scalac, you'll learn about the Scala Collections API an...

Ready to design Node.js backends that scale elegantly with new features and are a pleasure to maintain? Learn to apply functional programming patterns that transcend Express.js - these ideas are found in exceptional production codebases of all kinds. Whether you're a seasoned back-end developer, front-end developer or recent web boot camp...

Work with Apache Spark using Scala to deploy and set up single-node, multi-node, and high-availability clusters. This book discusses various components of Spark such as Spark Core, DataFrames, Datasets and SQL, Spark Streaming, Spark MLib, and R on Spark with the help of practical code snippets for each topic. Practical Apache Spark also ...