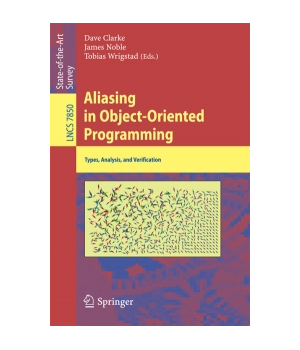 This book presents a survey of the state-of-the-art on techniques for dealing with aliasing in object-oriented programming. It marks the 20th anniversary of the paper The Geneva Convention On The Treatment of Object Aliasing by John Hogg, Doug Lea, Alan Wills, Dennis de Champeaux and Richard Holt. The 22 revised papers were carefully reviewed to ensure the highest quality.The contributions are organized in topical sections on the Geneva convention, ownership, concurrency, alias analysis, controlling effects, verification, programming languages, and visions.

Gain the fundamental concepts of object-oriented programming with examples in Java. This 2nd edition comes with detailed coverage and enhanced discussion on fundamental topics such as inheritance, polymorphism, abstract classes, interfaces, and packages. This edition also includes discussions on multithread programming, generic programmin...

This practical example-oriented guide will teach you advanced concepts of object-oriented programming in Python. This book will present detailed examples of almost all of the special method names that support creating classes that integrate seamlessly with Python's built-in features. It will show you how to use JSON, YAML, Pickle, CS...

Object-oriented programming (OOP) is a popular design paradigm in which data and behaviors are encapsulated in such a way that they can be manipulated together. This third edition of Python 3 Object-Oriented Programming fully explains classes, data encapsulation, and exceptions with an emphasis on when you can use each principle to develo...

Object-oriented programming (OOP) is a popular design paradigm in which data and behaviors are encapsulated in such a way that they can be manipulated together. Python Object-Oriented Programming, Fourth Edition dives deep into the various aspects of OOP, Python as an OOP language, common and advanced design patterns, and hands-on data ma...

An Introduction to Object-Oriented Programming with Java, 5th Edition

An Introduction to Object-Oriented Programming with Java takes a full-immersion approach to object-oriented programming. Proper object-oriented design practices are emphasized throughout the book. Students learn how to use the standard classes first, then learn to design their own classes.Wu uses a gentler approach to teaching students ho...

Python 3 is more versatile and easier to use than ever. It runs on all major platforms in a huge array of use cases. Coding in Python minimizes development time and increases productivity in comparison to other languages. Clean, maintainable code is easy to both read and write using Python's clear, concise syntax.Object-oriented prog...

Learning Object-Oriented Programming is an easy-to-follow guide full of hands-on examples of solutions to common problems with object-oriented code in Python, JavaScript, and C#. It starts by helping you to recognize objects from real-life scenarios and demonstrates that working with them makes it simpler to write code that is easy to und...