From Programming Model to Applications 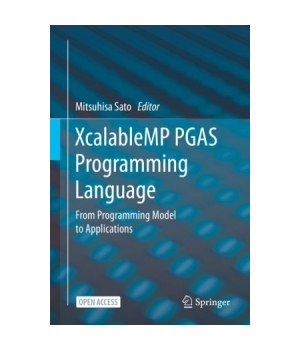 XcalableMP is a directive-based parallel programming language based on Fortran and C, supporting a Partitioned Global Address Space (PGAS) model for distributed memory parallel systems. This open book presents XcalableMP language from its programming model and basic concept to the experience and performance of applications described in XcalableMP.?

XcalableMP was taken as a parallel programming language project in the FLAGSHIP 2020 project, which was to develop the Japanese flagship supercomputer, Fugaku, for improving the productivity of parallel programing. XcalableMP is now available on Fugaku and its performance is enhanced by the Fugaku interconnect, Tofu-D.

The global-view programming model of XcalableMP, inherited from High-Performance Fortran (HPF), provides an easy and useful solution to parallelize data-parallel programs with directives for distributed global array and work distribution and shadow communication. The local-view programming adopts coarray notation from Coarray Fortran (CAF) to describe explicit communication in a PGAS model. The language specification was designed and proposed by the XcalableMP Specification Working Group organized in the PC Consortium, Japan.

The Omni XcalableMP compiler is a production-level reference implementation of XcalableMP compiler for C and Fortran 2008, developed by RIKEN CCS and the University of Tsukuba. The performance of the XcalableMP program was used in the Fugaku as well as the K computer. A performance study showed that XcalableMP enables a scalable performance comparable to the message passing interface (MPI) version with a clean and easy-to-understand programming style requiring little effort.

Masterminds of Programming features exclusive interviews with the creators of several historic and highly influential programming languages. In this unique collection, you'll learn about the processes that led to specific design decisions, including the goals they had in mind, the trade-offs they had to make, and how their experiences hav...

This book will show you that PostgreSQL is so much more than a database server. In fact, it could even be seen as an application development framework, with the added bonuses of transaction support, massive data storage, journaling, recovery, and a host of other features that the PostgreSQL engine provides.You will get to grips with creat...

Quantum computing is a growing field, with many research projects focusing on programming quantum computers in the most efficient way possible. One of the biggest challenges faced with existing languages is that they work on low-level circuit model details and are not able to represent quantum programs accurately. Developed by researchers...

by Bruce A. Tate

You should learn a programming language every year, as recommended by The Pragmatic Programmer. But if one per year is good, how about Seven Languages in Seven Weeks? In this book you'll get a hands-on tour of Clojure, Haskell, Io, Prolog, Scala, Erlang, and Ruby. Whether or not your favorite language is on that list, you'll broaden your ...

In this open book, our goal is to study the fundamental concepts in programming languages, as opposed to learning a range of specific languages. Languages are easy to learn, it is the concepts behind them that are difficult. The basic features we study in turn include higher-order functions, data structures in the form of records and vari...

Types are the central organizing principle of the theory of programming languages. Language features are manifestations of type structure. The syntax of a language is governed by the constructs that define its types, and its semantics is determined by the interactions among those constructs. The soundness of a language design - the absenc...