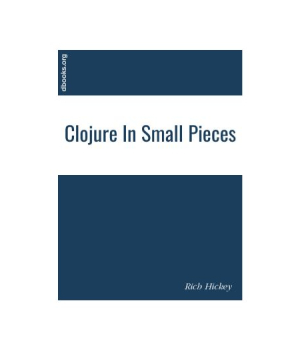 Rich Hickey invented Clojure. This is a fork of the project to experiment with literate programming as a development and documentation technology.

Most programmers are still locked into the idea of making a program out of a large pile of tiny files containing pieces of programs. They do not realize that this organization was forced by the fact that machines like the PDP 11 only had 8k of memory and a limit of 4k buffers in the editor. Thus there was a lot of machinery built up, such as overlay linkers, to try to reconstruct the whole program.

The time has come to move into a more rational means of creating and maintaining programs. Knuth suggested we write programs like we write literature, with the idea that we are trying to communicate the ideas to other people. The fact that the machine can also run the programs is a useful side-effect but not important.

Very few people have seen a literate program so this is intended as a complete working example, published in book form. The intent is that you can sit and read this book like any other novel. At the end of it you will be familiar with the ideas and how those ideas are actually expressed in the code. If programmers can read it and understand it then they can maintain and modify it. The ideas will have been communicated. The code will be changed to match changes in the idea. We will all benefit.

Clojure in Action, 2nd Edition is an expanded and improved version that's been updated to cover the new features of Clojure 1.6. The book gives you a rapid introduction to the Clojure language, moving from abstract theory to practical examples. You'll start by learning how to use Clojure as a general-purpose language. Next, you&...

Microservices enable us to develop software in small pieces that work together but can be developed separately; this is one reason why enterprises have started embracing them. For the past few years, Node.js has emerged as a strong candidate for developing microservices because of its ability to increase your productivity and the performa...

Clojure in Action is a hands-on tutorial for the working programmer who has written code in a language like Java or Ruby, but has no prior experience with Lisp. It teaches Clojure from the basics to advanced topics using practical, real-world application examples. Blow through the theory and dive into practical matters like unit-testing a...

Rethinking the Internet of Things

Over the next decade, most devices connected to the Internet will not be used by people in the familiar way that personal computers, tablets and smart phones are. Billions of interconnected devices will be monitoring the environment, transportation systems, factories, farms, forests, utilities, soil and weather conditions, oceans and reso...

Apply a methodology and practical solutions for monitoring the behavior of the Internet of Things (IoT), industrial control systems (ICS), and other critical network devices with the inexpensive Raspberry Pi. With this book, you will master passive monitoring and detection of aberrant behavior, and learn how to generate early indications ...