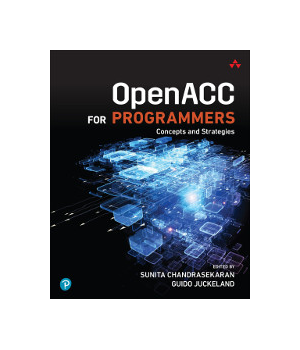 Scientists and technical professionals can use OpenACC to leverage the immense power of modern GPUs without the complexity traditionally associated with programming them. OpenACC for Programmers is one of the first comprehensive and practical overviews of OpenACC for massively parallel programming.

This book integrates contributions from 19 leading parallel-programming experts from academia, public research organizations, and industry. The authors and editors explain each key concept behind OpenACC, demonstrate how to use essential OpenACC development tools, and thoroughly explore each OpenACC feature set.

Throughout, you'll find realistic examples, hands-on exercises, and case studies showcasing the efficient use of OpenACC language constructs. You'll discover how OpenACC's language constructs can be translated to maximize application performance, and how its standard interface can target multiple platforms via widely used programming languages.

Each chapter builds on what you've already learned, helping you build practical mastery one step at a time, whether you're a GPU programmer, scientist, engineer, or student.

Beginning COBOL for Programmers is a comprehensive, sophisticated tutorial and modular skills reference on the COBOL programming language for established programmers. This book is for you if you are a developer who would like to-or must-add COBOL to your repertoire. Perhaps you recognize the opportunities presented by the current COBOL sk...

UNIX expert Randal K. Michael guides you through every detail of writing shell scripts to automate specific tasks. Each chapter begins with a typical, everyday UNIX challenge, then shows you how to take basic syntax and turn it into a shell scripting solution. Covering Bash, Bourne, and Korn shell scripting, this updated edition provides ...

It takes a book as versatile as its subject to cover Apache Tomcat. This book is a valuable reference for administrators and webmasters, a useful guide for programmers who want to use Tomcat as their web application server during development or in production, and an excellent introduction for anyone interested in Tomcat. The new edition o...

Collecting data is relatively easy, but turning raw information into something useful requires that you know how to extract precisely what you need. With this insightful book, intermediate to experienced programmers interested in data analysis will learn techniques for working with data in a business environment. You'll learn how to look ...

TextMate is a powerful tool for programmers, web designers, and anyone else who regularly needs to work with text files on Mac OS X. TextMate focuses on pragmatic automation, which means it will save you time-time that's always in short supply. See how your lowly text editor can become a hard working member of your staff....

How can you take advantage of feedback control for enterprise programming? With this book, author Philipp K. Janert demonstrates how the same principles that govern cruise control in your car also apply to data center management and other enterprise systems. Through case studies and hands-on simulations, you'll learn methods to solve seve...

Self-driving cars, natural language recognition, and online recommendation engines are all possible thanks to Machine Learning. Now you can create your own genetic algorithms, nature-inspired swarms, Monte Carlo simulations, cellular automata, and clusters. Learn how to test your ML code and dive into even more advanced topics. If you are...

Popular software modelling notations visualize implementation minutiae but fail to scale, to capture design abstractions, and to deliver effective tool support. Tailored to overcome these limitations, Codecharts can elegantly model roadmaps and blueprints for Java, C++, and C# programs of any size clearly, precisely, and at any level of a...