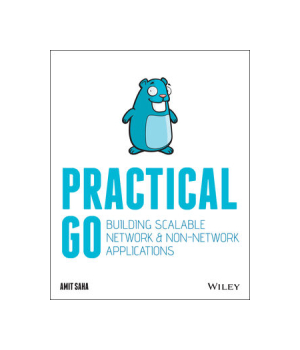 Google announced the Go programming language to the public in 2009, with the version 1.0 release announced in 2012. Since its announcement to the community, and the compatibility promise of the 1.0 release, the Go language has been used to write scalable and high-impact software programs ranging from command-line applications and critical infrastructure tools to large-scale distributed systems. It's speed, simplicity, and reliability make it a perfect choice for developers working in various domains.

In Practical Go - Building Scalable Network + Non-Network Applications, you will learn to use the Go programming language to build robust, production-ready software applications. You will learn just enough to building command line tools and applications communicating over HTTP and gRPC.

You will learn to implement best practices using hands-on examples written with modern practices in mind. With its focus on using the standard library packages as far as possible, Practical Go will give you a solid foundation for developing large applications using Go leveraging the best of the language's ecosystem.

A compilation of best practice solutions to common Web Development problems in PHP, focusing on the achievement of practical goals by applying well-structured, object orientated software design principles.In addition to being an excellent reference with over 60 customizable solutions, the book acts as an excellent primer for Object Orient...

Professional Git takes a professional approach to learning this massively popular software development tool, and provides an up-to-date guide for new users. More than just a development manual, this book helps you get into the Git mindset - extensive discussion of corollaries to traditional systems as well as considerations unique to Git ...

Google's new ARCore and Daydream VR platforms enable you to deliver advanced augmented and virtual reality games and apps on a wide spectrum of modern Android devices. Now for the first time, there's a comprehensive deep dive into both ARCore and Daydream for every Android developer and designer. Multi-award-winning AR/VR develo...

As one of today's cloud computing services, Google App Engine does more than provide access to a large system of servers. It also offers you a simple model for building applications that scale automatically to accommodate millions of users. With Programming Google App Engine, you'll get expert practical guidance that will help y...

Sams Teach Yourself Go in 24 Hours

In just 24 sessions of one hour or less, Sams Teach Yourself Go in 24 Hours will help new and experienced programmers build software that's simpler, more reliable, and far more scalable. This book's straightforward, step-by-step approach guides you from setting up your environment through testing and deploying powerful solutions...

Practical SharePoint 2013 Enterprise Content Management is the first book to guide you through planning and designing each phase of your information life cycle with SharePoint 2013. Author and SharePoint expert Steve Goodyear walks you through how to analyze and plan enterprise content management (ECM) solutions for an effective and end-t...