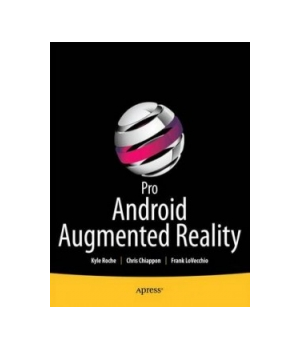 Augmented reality (AR) offers a live direct or indirect view of a physical, real-world environment, where the elements and surroundings are augmented by computer-generated sensory input such as graphics and GPS data. It makes a game more real. Your social media app puts you where want to be or go.

Pro Android Augmented Reality walks you through the foundations of building an augmented reality application. From using various software and Android hardware sensors, such as an accelerometer or a magnetometer (compass), you'll learn the building blocks of augmented reality for both marker- and location-based apps.

Pro Android 4 shows you how to build real-world and fun mobile apps using the new Android SDK 4 (Ice Cream Sandwich), which unifies Gingerbread for smartphones, Honeycomb for tablets and augments further with Google TV and more.This Android 4 book updates the best selling Pro Android 3 and covers everything from the fundamentals of buildi...

Pro Android 5 shows you how to build real-world and fun mobile apps using the Android 5 SDK. This book updates the best-selling Pro Android and covers everything from the fundamentals of building apps for smartphones, tablets, and embedded devices to advanced concepts such as custom components, multi-tasking, sensors/augmented reality, be...

Create a fully featured application that's both sophisticated and engaging. This book provides a detailed guide in developing augmented reality games that can take advantage of the advanced capabilities of new iOS devices and code while also offering compatibility with still supported legacy devices. No programming experience is necessary...