Making and Marketing Apps that Succeed on Google Play, Amazon Appstore and More 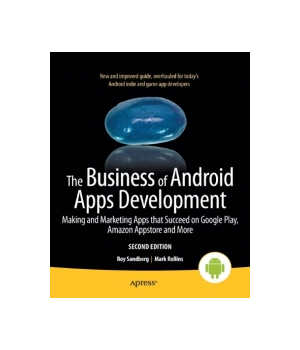 The growing but still evolving success of the Android platform has ushered in a second mobile technology "gold rush" for app developers. Google Play and Amazon Appstore for Android apps has become the second go-to apps eco for today's app developers. While not yet as large in terms of number of apps as iTunes, Google Play and Amazon Appstore have so many apps that it has become increasingly difficult for new apps to stand out in the crowd. Achieving consumer awareness and sales longevity for your Android app requires a lot of organization and some strategic planning.

Updated and expanded for the new Apple iOS8, The Business of iOS App Development, Third Edition shows you how to incorporate marketing and business savvy into every aspect of the design and development process, giving your app the best possible chance of succeeding in the App Store.This book is written by experienced developers with busin...

The Business of Android Apps Development

The growing but still evolving success of the Android platform has ushered in a second mobile technology "gold rush" for apps developers, but with well over 100,000 apps and counting in the Google Android Market and now the Amazon Android Appstore, it has become increasingly difficult for new applications to stand out in the cro...

There are millions of Android apps out there for people to download - how do you make sure yours has the edge? It's not always about innovation and ideas - the most successful apps are those that are able to satisfy customer demands - they're the ones that look the best, the fastest, and the easiest and most intuitive to use.This book sho...

The Art of the App Store

It takes more than a great idea to succeed at iPhone and iPad app development.This indispensible guide provides an in-depth look into the perils and potential of the iPhone and iPad app landscape. The Art of the App Store presents tried and tested methods for competitive research, findingyour niche, understanding customer expectations, se...

LibGDX is a multiplatform game development framework, and is one of the most popular frameworks for building games, providing a comprehensive set of development capabilities and features to use and incorporate into games.This book starts off by introducing you to LibGDX and how to use its project setup tool to build an application that ca...

Technology trends come and go, but few have generated the excitement, momentum, or long-term impact that mobile computing has. Mobile computing impacts people's lives at work and at home on a daily basis. Many companies and individual developers are looking to become a part of the movement but are unsure how to best utilize their existing...