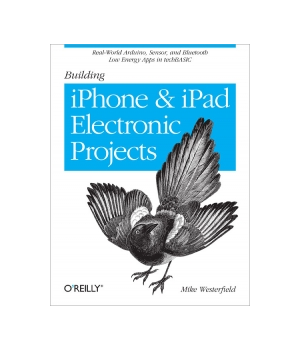 Why simply play music or go online when you can use your iPhone or iPad for some really fun projects, such as building a metal detector, hacking a radio control truck, or tracking a model rocket in flight? Learn how to build these and other cool things by using iOS device sensors and inexpensive hardware such as Arduino and a Bluetooth Low Energy (LE) Shield.

This hands-on book shows you how to write simple applications with techBASIC, an Apple-approved development environment that runs on iOS devices. By using code and example programs built into techBASIC, you'll learn how to write apps directly on your Apple device and have it interact with other hardware.

Let's say you have a killer app idea for iPhone and iPad. Where do you begin? Head First iPhone and iPad Development will help you get your first application up and running in no time. You'll not only learn how to design for Apple's devices, you'll also master the iPhone SDK tools - including Xcode and Objective-C prog...

Let's say you have a killer app idea for iPhone and iPad. Where do you begin? Head First iPhone and iPad Development will help you get your first application up and running in no time. You'll not only learn how to design for Apple's devices, you'll also master the iPhone SDK tools - including Interface Builder, Xcode, ...

Getting Started with Electronic Projects

This book will help you join the thousands of successful iPhone apps developers without needing to learn Objective-C or the Cocoa touch APIs. If you want to apply your existing web development skills to iPhone and iPad development, then now you can. WebKit's support for HTML5 means any web developer can create compelling apps for bot...

So how do you build an application for the iPhone and iPad? Don't you need to spend years learning complicated programming languages? What about Objective-C and Cocoa touch? The answer is that you don't need to know any of those things! Anybody can start building simple apps for the iPhone and iPad, and this book will show you h...

Examine how to keep iOS devices safe in the physical world, including creating company policies for iPhones; assessing and defending against cyber vulnerabilities and attacks; working with preinstalled as well as third party tools; and strategies for keeping your data safe including backing up and screen locks.Managing and maintaining iPh...

Developers are searching for an advanced resource that takes them through what is now a maturing market for the iPhone as well as the nascent market for the iPad this book fulfills that demand. Providing step-by-step guidance on using the latest version of the iPhone SDK, this hands-on guide discusses a variety of topics and features of...

The iPhone and iPad have made a powerful impact on the business world. Developers creating iOS apps for the enterprise face unique challenges involving networking, system integration, security, and device management. This Wrox guide provides everything you need to know to write iOS apps that integrate with enterprise network resources, pr...