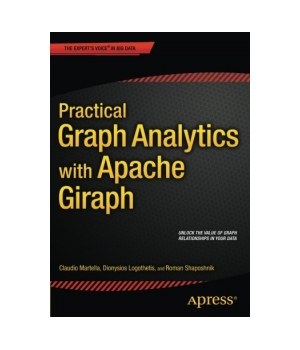 Graphs arise in a wealth of data scenarios and describe the connections that are naturally formed in both digital and real worlds. Examples of such connections abound in online social networks such as Facebook and Twitter, among users who rate movies from services like Netflix and Amazon Prime, and are useful even in the context of biological networks for scientific research. Whether in the context of business or science, viewing data as connected adds value by increasing the amount of information available to be drawn from that data and put to use in generating new revenue or scientific opportunities.

Apache Giraph offers a simple yet flexible programming model targeted to graph algorithms and designed to scale easily to accommodate massive amounts of data. Originally developed at Yahoo!, Giraph is now a top top-level project at the Apache Foundation, and it enlists contributors from companies such as Facebook, LinkedIn, and Twitter.

Apache Spark is an in-memory, cluster-based data processing system that provides a wide range of functionalities such as big data processing, analytics, machine learning, and more. With this Learning Path, you can take your knowledge of Apache Spark to the next level by learning how to expand Spark's functionality and building your own da...

Get started with Apache Flink, the open source framework that enables you to process streaming data - such as user interactions, sensor data, and machine logs - as it arrives. With this practical guide, you'll learn how to use Apache Flink's stream processing APIs to implement, continuously run, and maintain real-world applications.Author...

Derivatives Analytics with Python shows you how to implement market-consistent valuation and hedging approaches using advanced financial models, efficient numerical techniques, and the powerful capabilities of the Python programming language. This unique guide offers detailed explanations of all theory, methods, and processes, giving you ...

Practical Business Analytics Using SAS: A Hands-on Guide shows SAS users and businesspeople how to analyze data effectively in real-life business scenarios.The book begins with an introduction to analytics, analytical tools, and SAS programming. The authors - both SAS, statistics, analytics, and big data experts - first show how SAS is us...

This book is a step-by-step guide for learning how to use Spark for different types of big-data analytics projects, including batch, interactive, graph, and stream data analysis as well as machine learning. It covers Spark core and its add-on libraries, including Spark SQL, Spark Streaming, GraphX, MLlib, and Spark ML.Big Data Analytics w...