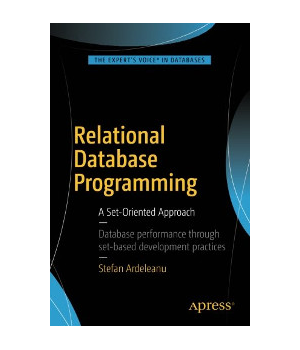 Learn the best way of writing code to run inside a relational database. This book shows how a holistic and set-oriented approach to database programming can far exceed the performance of the row-by-row model that is too often used by developers who haven't been shown a better way.

The set based and holistic style of development is not promoted enough in universities, and many application developers are not fully aware of it. There are many performance issues all over the world in relational databases due to the use of the atomic and inappropriate style of programming. This book compares the two styles, and promotes the holistic style of development as the most suitable one. Examples are given to demonstrate the superiority of a set-based and holistic approach.

PostgreSQL is a rock-solid, scalable, and safe enterprise-level relational database. With a broad range of features and stability, it is ever increasing in popularity.This book shows you how to take advantage of PostgreSQL 11 features for server-side programming. Server-side programming enables strong data encapsulation and coherence.The ...

Chris Date, one of the founders of the relational model, has updated and expanded his relational database dictionary to include more than 900 terms.Over 900 relational database terms defined; Precise and concise definitions, unlike those found on Wikipedia and other sources; Clear examples used where appropriate; Hyperlinks included in th...

Learn effective and scalable database design techniques in a SQL Server environment. Pro SQL Server 2012 Relational Database Design and Implementation covers everything from design logic that business users will understand, all the way to the physical implementation of design in a SQL Server database. Grounded in best practices and a soli...

Integrating data from multiple sources is essential in the age of big data, but it can be a challenging and time-consuming task. This handy cookbook provides dozens of ready-to-use recipes for using Apache Sqoop, the command-line interface application that optimizes data transfers between relational databases and Hadoop.Sqoop is both powe...

No matter what DBMS you are using - Oracle, DB2, SQL Server, MySQL, PostgreSQL - misunderstandings can always arise over the precise meanings of terms, misunderstandings that can have a serious effect on the success of your database projects. For example, here are some common database terms: attribute, BCNF, consistency, denormalization, ...

PostgreSQL is one of the most powerful and easy to use database management systems. It has strong support from the community and is being actively developed with a new release every year. PostgreSQL supports the most advanced features included in SQL standards. Also it provides NoSQL capabilities, and very rich data types and extensions. ...