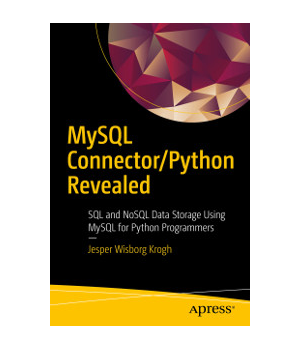 Move data back and forth between database and application. The must-have knowledge in this book helps programmers learn how to use the official driver, MySQL Connector/Python, by which Python programs communicate with the MySQL database.

This book takes you from the initial installation of the connector through basic query execution, then through more advanced topics, error handing, and troubleshooting. The book covers both the traditional API as well as the new X DevAPI. The X DevAPI is part of MySQL 8.0 and is an API that can be used with connectors for several programming languages and is used from the command-line interface known as MySQL Shell. You will learn to use the connector by working through code examples and following a discussion of how the API calls work.

By the end of the book, you will be able to use MySQL as the back-end storage for your Python programs, and you'll even have the option of choosing between SQL and NoSQL interfaces.

Python is a dynamic programming language, which is completely enterprise ready, owing largely to the variety of support modules that are available to extend its capabilities. In order to build productive and feature-rich Python applications, we need to use MySQL for Python, a module that provides database support to our applications. Alth...

As Linux continues to grow in popularity, there has never been more of a need to understand how to develop for this platform. Rather than focusing on a particular language or development technique, Professional Linux Programming looks at the different development environments within Linux - the kernel, the desktop, and the web - and then ...

Puzzle-based learning is an active learning technique. With code puzzles, you will learn faster, smarter, and better.Coffee Break Python Slicing is all about growing your Python expertise - one coffee at a time. The focus lies on the important slicing technique to access consecutive data ranges. Understanding slicing thoroughly is crucial...

It is more powerful, convenient, consistent, and expressive than ever before. Now, leading Python programmer Mark Summerfield demonstrates how to write code that takes full advantage of Python 3's features and idioms. Programming in Python 3, Second Edition, brings together all the knowledge you need to write any program, use any standard...

As an open source, object-oriented programming language, Python is easy to understand, extendable, and user-friendly. This book covers every aspect of Python so that you can get started writing your own programs with Python today. Author James Payne begins with the most basic concepts of the Python language - placing a special focus on th...