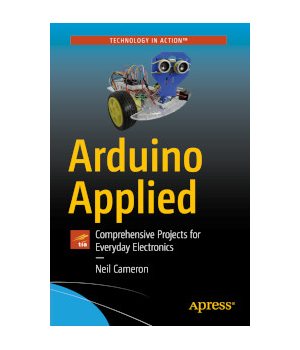 Extend the range of your Arduino skills, incorporate the new developments in both hardware and software, and understand how the electronic applications function in everyday life. This project-based book extends the Arduino Uno starter kits and increases knowledge of microcontrollers in electronic applications.

Learn how to build complex Arduino projects, break them down into smaller ones, and then enhance them, thereby broadening your understanding of each topic.You'll use the Arduino Uno in a range of applications such as a blinking LED, route mapping with a mobile GPS system, and uploading information to the internet.

You'll also apply the Arduino Uno to sensors, collecting and displaying information, Bluetooth and wireless communications, digital image captures, route tracking with GPS, controlling motors, color and sound, building robots, and internet access. With Arduino Applied, prior knowledge of electronics is not required, as each topic is described and illustrated with examples using the Arduino Uno.

Set up the Arduino Uno and its programming environment; Understand the application of electronics in every day systems; Build projects with a microcontroller and readily available electronic components.

Beginning C for Arduino is written for those who have no prior experience with microcontrollers or programming but would like to experiment and learn both. This book introduces you to the C programming language, reinforcing each programming structure with a simple demonstration of how you can use C to control the Arduino family of microco...

We all know how awesome LEGO is, and more and more people are discovering how many amazing things you can do with Arduino. In Arduino and LEGO Projects, Jon Lazar shows you how to combine two of the coolest things on the planet to make fun gadgets like a Magic Lantern RF reader, a sensor-enabled LEGO music box, and even an Arduino-control...

Beginning C for Arduino, 2nd Edition is written for those who have no prior experience with microcontrollers or programming but would like to experiment and learn both. Updated with new projects and new boards, this book introduces you to the C programming language, reinforcing each programming structure with a simple demonstration of how...

It's not enough to just build your Arduino projects; it's time to actually learn how things work! This book will take you through not only how to use the Arduino software and hardware, but more importantly show you how it all works and how the software relates to the hardware.Arduino Software Internals takes a detailed dive into the Ardui...

The future belongs to applications and services that involve connected devices, requiring physical components to communicate with web-level applications. Arduino combined with the popular open source software platform Python can be used to develop the next level of advanced Internet of Things (IoT) projects with graphical user interfaces ...

The single-chip computer board Arduino is small in size but vast in scope, capable of being used for electronic projects from robotics through to home automation. The most popular embedded platform in the world, Arduino users range from school children to industry experts, all incorporating it into their designs.Arduino Development Cookbo...

Q might have Bond's gadgets- but he doesn't have an Arduino (not yet at least). Find out how the tiny Arduino microcomputer can be used to build an impressive range of neat secret agent projects that can help you go undercover and get to grips with the cutting-edge of the world of espionage with this book, created for ardent Arduino fans ...

Arduino is an open source microcontroller built on a single-circuit board that is capable of receiving sensory input from the environment and controlling interactive physical objects.The first few projects of this book will focus on displaying tweets within your app by connecting to Twitter, controlling basic functions of the Arduino boar...