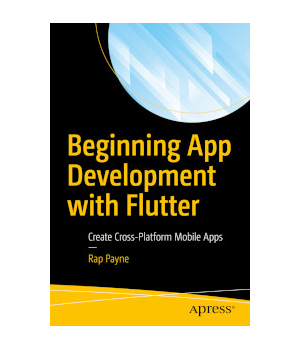 Create iOS and Android apps with Flutter using just one codebase. App development on multiple platforms has historically been difficult and complex. This book breaks down complex concepts and tasks into easily digestible segments with examples, pictures, and hands-on labs with starters and solutions.

In doing so, you'll develop a basic understanding of the Dart programming language; the entire Flutter development toolchain; the differences between stateful and stateless widgets; and a working knowledge of the architecture of apps. All the most important parts of app development with Flutter are covered in this book. Work with themes and styles. Develop custom widgets. Teach your app to respond to gestures like taps, swipes, and pinches. Design, create and control the layout of your app. Create tools to handle form data entry from users. And ultimately create killer multiscreen apps with navigation, menus, and tabs.

Flutter is Google's new framework for creating mobile apps that run on iOS and Android phones both.You had to be a super-developer to write apps for iOS or Android alone. But writing for both? Forget about it! You had to be familiar with Swift, Java/Kotlin, Xcode, Eclipse, and a bunch of other technologies simultaneously. Beginning App Development with Flutter simplifies the entire process.

Get the most out of great Flutter widgets; Create custom widgets, both stateless and stateful; Exercise expert control over your Flutter layouts; Make your app respond to gestures like swiping, pinching and tapping; Initiate async Ajax calls to RESTful APIs - including Google Firebase!

Real World Windows 8 App Development with JavaScript offers you practical advice and hard-earned insights that will help you create and publish apps to a worldwide market.Led by authors with deep Windows 8 app development experience, you'll learn how to make the most of Microsoft's APIs for hooking into Windows 8 on all devices,...

Explore all the aspects of the Aurelia framework, including routing, templating, data binding, custom elements, event aggregation, HTTP services, features, plugins, etc. You'll see how to tie all the pieces together and walk away with an understanding of how to build applications, end to end.Practical App Development with Aurelia tea...

Yii is a high performance PHP framework used for rapid web application development. It is well designed, well supported, easy to learn, and easy to maintain. This book embraces the learn-by-example methodology to show you the most important features of the Yii 2 framework. Throughout the course of this book, you will build a simple real-w...

by Matthew A. Stoecker

Announcing an all-new Self-Paced Training Kit designed to help maximize your performance on 70-511, the required exam for the MCTS certification: Windows Application Development with Microsoft .NET Framework 4. This 2-in-1 kit includes the official Microsoft study guide, plus practice tests to help you assess your skills. It comes packed ...