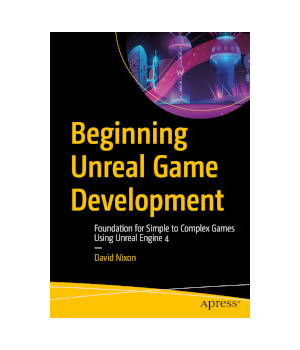 Get started creating video games using Unreal Engine 4 (UE4) and learning the fundamentals of game development. Through hands-on, step-by-step tutorials, you will learn to design engaging environments and a build solid foundation for more complex games. Discover how to utilize the 3D game design software behind the development of immensely popular games for PC, console, and mobile.

Beginning Unreal Game Development steers you through the fundamentals of game development with UE4 to design environments that both engage the player and are aesthetically pleasing. Author David Nixon shows you how to script logic, define behaviors, store data, and create characters. You will learn to create user interfaces, such as menus, load screens, and head-up displays (HUDs), and manipulate audio to add music, sound effects, and dialogue to your game. The book covers level editors, actor types, blueprints, character creation and control, and much more. Throughout the book, you'll put theory into practice and create an actual game using a series of step-by-step tutorials.

With a clear, step-by-step approach, Beginning Unreal Game Development builds up your knowledge of Unreal Engine 4 so you can start creating and deploying your own 3D video games in no time.

Learn the fundamentals of game design; Understand how to use Unreal Engine 4; Design amazing levels for your characters to play in; Script logic to control the behavior of the world you create.

Design and create video games using Java, with the LibGDX software library. By reading Beginning Java Game Development with LibGDX, you will learn how to design video game programs and how to build them in Java. You will be able to create your own 2D games, using various hardware for input (keyboard/mouse, gamepad controllers, or touchscr...

Game apps are one of the most popular categories in the Apple iTunes App Store. Well, the introduction of the new Swift programming language will make game development even more appealing and easier to existing and future iOS app developers. In response, James Goodwill, Wesley Matlock and Apress introduce you to this book, Beginning Swift...

iOS is an operating system for Apple manufactured phones and tablets. Mobile gaming is one of the fastest-growing industries, and compatibility with iOS is now becoming the norm for game developers. SpriteKit is part of the native SDK from Apple, and enables developers to make simple entry into game development without unnecessary overhea...

Designed for high-level game programming, UnrealScript is used in tandem with the Unreal Engine to provide a scripting language that is ideal for creating your very own unique gameplay experience. By learning how to replicate some of the advanced techniques used in today's modern games, you too can take your game to the next level and sta...

Want to build games with iOS technologies? This cookbook provides detailed recipes for a wide range of common iOS game-development issues, ranging from 2D and 3D math to Game Center integration, and OpenGL to performance. If you're familiar with iOS and Objective-C, this is the problem-solving guide you want.Rather than focus on specific ...