An Introduction to Kernel Hacking 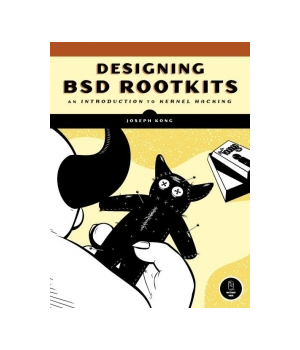 Though rootkits have a fairly negative image, they can be used for both good and evil. Designing BSD Rootkits arms you with the knowledge you need to write offensive rootkits, to defend against malicious ones, and to explore the FreeBSD kernel and operating system in the process.

Organized as a tutorial, Designing BSD Rootkits will teach you the fundamentals of programming and developing rootkits under the FreeBSD operating system. Author Joseph Kong's goal is to make you smarter, not to teach you how to write exploits or launch attacks. You'll learn how to maintain root access long after gaining access to a computer and how to hack FreeBSD.

Kongs liberal use of examples assumes no prior kernel-hacking experience but doesn't water down the information. All code is thoroughly described and analyzed, and each chapter contains at least one real-world application.

Providing real-world attacks and detailed countermeasures, this new volume is a comprehensive guide to the &quot;black art&quot; of malware and rootkits. You will learn how to identify and defend against malicious software and dangerous hidden scripts. The book includes practical examples, case studies, and risk ratings - all in t...

A rootkit is a type of malicious software that gives the hacker root or administrator access to your network. They are activated before your system's operating system has completely booted up, making them extremely difficult to detect. Rootkits allow hackers to install hidden files, processes, and hidden user accounts. Hackers can use the...

Looking for a unique set of practical tips, tricks, and tools for administrators and power users of BSD systems? From hacks to customize the user environment to networking, securing the system, and optimization, BSD Hacks takes a creative approach to saving time and accomplishing more with fewer resources. If you want more than the aver...

From the creators of Yahoo!'s Design Pattern Library, Designing Social Interfaces provides you with more than 100 patterns, principles, and best practices, along with salient advice for many of the common challenges you'll face when starting a social website. Christian Crumlish and Erin Malone share hard-won insights into what works, what...

Prepare for Microsoft Exam 70-413 - and help demonstrate your real-world mastery designing, and implementing Windows Server infrastructure in an enterprise environment. Designed for experienced IT professionals ready to advance their status, Exam Ref focuses on the critical-thinking and decision-making acumen needed for success at the MCS...

Designing for Windows 8 is a fast-paced, 150-page primer on the key design concepts you need to create successful Windows 8 apps. This book will help you design a user interface that is both delightful and effective, feels 'right' to your users, and encapsulates a great Windows 8 experience.If you're building Windows 8 apps for the first ...

Networked thermostats, fitness monitors, and door locks show that the Internet of Things can (and will) enable new ways for people to interact with the world around them. But designing connected products for consumers brings new challenges beyond conventional software UI and interaction design.This book provides experienced UX designers a...