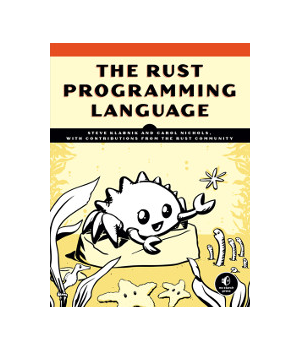 The Rust Programming Language is the official book on Rust, an open-source, community-developed systems programming language that runs blazingly fast, prevents segfaults, and guarantees thread safety. This is the undisputed go-to guide to Rust, written by two members of the Rust core team, with feedback and contributions from 42 members of the community. The book assumes that you've written code in another programming language but makes no assumptions about which one, meaning the material is accessible and useful to developers from a wide variety of programming backgrounds.

The Book opens with a quick hands-on project to introduce the basics then explores key concepts in depth, such as ownership, the type system, error handling, and fearless concurrency. Next come detailed explanations of Rust-oriented perspectives on topics like pattern matching, iterators, and smart pointers, with concrete examples and exercises--taking you from theory to practice.

The Rust Programming Language will show you how to: Grasp important concepts unique to Rust like ownership, borrowing, and lifetimes; Use Cargo, Rust's built-in package manager, to build and maintain your code, including downloading and building dependencies; Effectively use Rust's zero-cost abstractions and employ your own.

You'll learn to develop reliable code that's speed and memory efficient, while avoiding the infamous and arcane programming pitfalls common at the systems level. When you need to dive down into lower-level control, this guide will show you how without taking on the customary risk of crashes or security holes and without requiring you to learn the fine points of a fickle toolchain.

The Rust Programming Language fully embraces Rust's potential to empower its users. This friendly and approachable guide will help you build not only your knowledge of Rust but also your ability to program with confidence in a wider variety of domains.

This is the perfect book for the experienced developer who wants to get serious about learning the Swift programming language. If you know at least one modern programming language, this book will teach you how to think and program in Swift. Swift's design is inspired by elements from object-oriented, functional, and generic programming.As...

by Alan A. A. Donovan, Brian W. Kernighan

The Go Programming Language is the authoritative resource for any programmer who wants to learn Go. It shows how to write clear and idiomatic Go to solve real-world problems. The book does not assume prior knowledge of Go nor experience with any specific language, so you'll find it accessible whether you're most comfortable with JavaScrip...

The popular C# programming language combines the high productivity of rapid application development languages with the raw power of C and C++. Updated to cover the new features of C# 4.0, including dynamic binding, named and optional parameters, and covariant and contravariant generic types, this release takes the language to the next lev...

Functional programming enables developers to create and deploy applications quickly and easily. Using the Clojure programming language and the Leiningen build tool, this book teaches you how to leverage various Clojure libraries into the building blocks of a web-based application.We'll start by generating a new, fully runnable, baseline w...

At their Worldwide Developer's conference (WWDC) in 2015, Apple announced Swift 2, a major update to the innovative programming language they first unveiled to the world the year before. Swift 2 features exciting enhancements to the original iteration of Swift, acting, as Apple put it themselves as "a successor to the C and Objective...