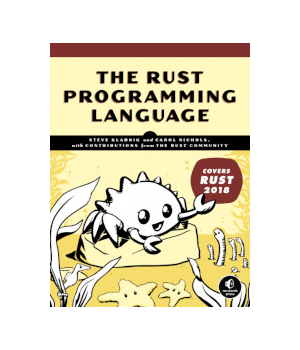 The authors of The Rust Programming Language, members of the Rust Core Team, share their knowledge and experience to show you how to take full advantage of Rust's features - from installation to creating robust and scalable programs. You'll begin with basics like creating functions, choosing data types, and binding variables and then move on to more advanced concepts, such as: Ownership and borrowing, lifetimes, and traits; Using Rust's memory safety guarantees to build fast, safe programs; Testing, error handling, and effective refactoring; Generics, smart pointers, multithreading, trait objects, and advanced pattern matching; Using Cargo, Rust's built-in package manager, to build, test, and document your code and manage dependencies; How best to use Rust's advanced compiler with compiler-led programming techniques.

You'll find plenty of code examples throughout the book, as well as three chapters dedicated to building complete projects to test your learning: a number guessing game, a Rust implementation of a command line tool, and a multithreaded server.

New to this edition: An extended section on Rust macros, an expanded chapter on modules, and appendixes on Rust development tools and editions.

The Rust Programming Language is the official book on Rust, an open-source, community-developed systems programming language that runs blazingly fast, prevents segfaults, and guarantees thread safety. This is the undisputed go-to guide to Rust, written by two members of the Rust core team, with feedback and contributions from 42 members o...

This is the perfect book for the experienced developer who wants to get serious about learning the Swift programming language. If you know at least one modern programming language, this book will teach you how to think and program in Swift. Swift's design is inspired by elements from object-oriented, functional, and generic programming.As...

C is a general-purpose, procedural computer programming language supporting structured programming, lexical variable scope, and recursion, with a static type system.The C Programming Language Handbook follows the 80/20 rule: learn in 20% of the time the 80% of a topic. In particular, the goal is to get you up to speed quickly with C....

by Alan A. A. Donovan, Brian W. Kernighan

The Go Programming Language is the authoritative resource for any programmer who wants to learn Go. It shows how to write clear and idiomatic Go to solve real-world problems. The book does not assume prior knowledge of Go nor experience with any specific language, so you'll find it accessible whether you're most comfortable with JavaScrip...

The popular C# programming language combines the high productivity of rapid application development languages with the raw power of C and C++. Updated to cover the new features of C# 4.0, including dynamic binding, named and optional parameters, and covariant and contravariant generic types, this release takes the language to the next lev...

Learn the C programming language easily and in a straightforward way. This book teaches the basics of C, the C Standard Library, and modern C standards. No previous programming experience is required.C is a language that is as popular today as it was decades ago. C covers a wide variety of domains. It can be used to program a microcontrol...