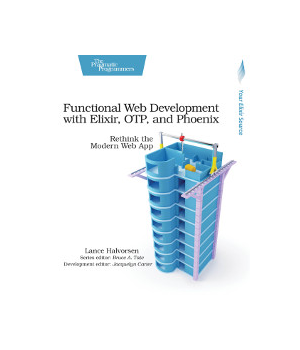 Elixir and OTP provide exceptional tools to build rock-solid back-end applications that scale. In this book, you'll build a web application in a radically different way, with a back end that holds application state. You'll use persistent Phoenix Channel connections instead of HTTP's request-response, and create the full application in distinct, decoupled layers.

In Part 1, start by building the business logic as a separate application, without Phoenix. Model the application domain with Elixir functions and simple data structures. By keeping state in memory instead of a database, you can reduce latency and simplify your code. In Part 2, add in the GenServer Behaviour to make managing in-memory state a breeze. Create a supervision tree to boost fault tolerance while separating error handling from business logic.

Phoenix is a modern web framework you can layer on top of business logic while keeping the two completely decoupled. In Part 3, you'll do exactly that as you build a web interface with Phoenix. Bring in the application from Part 2 as a dependency to a new Phoenix project. Then use ultra-scalable Phoenix Channels to establish persistent connections between the stateful server and a stateful front-end client.

You're going to love this way of building web apps!

Django, written in Python, is a web application framework designed to build complex web applications quickly without any hassle. It loosely follows the MVC pattern and adheres to the Don't Repeat Yourself principle, which makes a database-driven application efficient and highly scalable, and is by far the most popular and mature Python we...

Today's web technologies are evolving at near-light speed, bringing the promise of a seamless Internet ever closer to reality. When users can browse the Web on a three-inch phone screen as easily as on a fifty-inch HDTV, what's a developer to do?Peter Gasston's The Modern Web will guide you through the latest and most important tools of d...