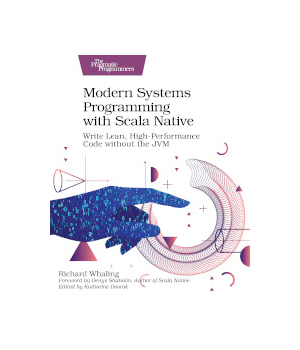 Access the power of bare-metal systems programming with Scala Native, an ahead-of-time Scala compiler. Without the baggage of legacy frameworks and virtual machines, Scala Native lets you re-imagine how your programs interact with your operating system. Compile Scala code down to native machine instructions; seamlessly invoke operating system APIs for low-level networking and IO; control pointers, arrays, and other memory management techniques for extreme performance; and enjoy instant start-up times. Skip the JVM and improve your code performance by getting close to the metal.

Developers generally build systems on top of the work of those who came before, accumulating layer upon layer of abstraction. Scala Native provides a rare opportunity to remove layers. Without the JVM, Scala Native uses POSIX and ANSI C APIs to build concise, expressive programs that run unusually close to bare metal. Scala Native compiles Scala code down to native machine instructions instead of JVM bytecode. It starts up fast, without the sluggish warm-up phase that's common for just-in-time compilers. Scala Native programs can seamlessly invoke operating system APIs for low-level networking and IO. And Scala Native lets you control pointers, arrays, and other memory layout types for extreme performance.

Write practical, bare-metal code with Scala Native, step by step. Understand the foundations of systems programming, including pointers, arrays, strings, and memory management. Use the UNIX socket API to write network client and server programs without the sort of frameworks higher-level languages rely on. Put all the pieces together to design and implement a modern, asynchronous microservice-style HTTP framework from scratch.

If you program in C++ you've been neglected. Test-driven development (TDD) is a modern software development practice that can dramatically reduce the number of defects in systems, produce more maintainable code, and give you the confidence to change your software to meet changing needs. But C++ programmers have been ignored by those promo...

The second version of Scala has undergone multiple changes to support features and library implementations. Scala 2.13, with its main focus on modularizing the standard library and simplifying collections, brings with it a host of updates.Learn Scala Programming addresses both technical and architectural changes to the redesigned standard...

C# developers, here's your opportunity to learn the ins-and-outs of Entity Framework Core, Microsoft's recently redesigned object-relational mapper. Benefit from hands-on learning that will teach you how to tackle frustrating database challenges, such as workarounds to missing features in Entity Framework Core, and learn how to optimize t...

This open access book is a modern guide for all C++ programmers to learn Threading Building Blocks (TBB). Written by TBB and parallel programming experts, this book reflects their collective decades of experience in developing and teaching parallel programming with TBB, offering their insights in an approachable manner. Throughout the boo...

In large projects, it can get difficult keeping track of all the interdependencies of the code base and how its state changes at runtime. Functional Programming helps us solve these problems. It is a paradigm specifically designed to deal with the complexity of software development. This book will show you how the right abstractions can r...

C++ is a general-purpose programming language with a bias toward system programming as it provides ready access to hardware-level resources, efficient compilation, and a versatile approach to higher-level abstractions.This book will help you understand the benefits of system programming with C++17. You will gain a firm understanding of va...