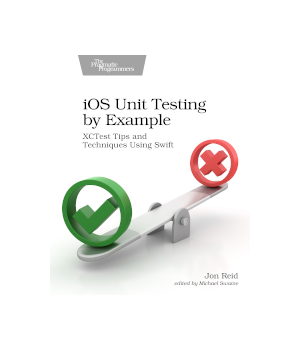 Fearlessly change the design of your iOS code with solid unit tests. Use Xcode's built-in test framework XCTest and Swift to get rapid feedback on all your code - including legacy code. Learn the tricks and techniques of testing all iOS code, especially view controllers (UIViewControllers), which are critical to iOS apps. Learn to isolate and replace dependencies in legacy code written without tests. Practice safe refactoring that makes these tests possible, and watch all your changes get verified quickly and automatically. Make even the boldest code changes with complete confidence.

Manual code and UI testing get slower the deeper your navigation hierarchy goes. It can take several taps just to reach a particular screen, never mind the actual workflow tests. Automatic unit testing offers such rapid feedback that it can change the rules of development. Bring testing to iOS development, even for legacy code. Use XCTest to write unit tests in Swift for all your code.

iOS developers typically reserve unit tests for their model classes alone. But that approach skips most of the code common to iOS apps, especially with UIViewControllers. Learn how to unit test these view controllers to expand your unit testing possibilities. Since good unit tests form the bedrock for safe refactoring, you're empowered to make bold changes. Learn how to avoid the most common mistakes Swift programmers make with the XCTest framework. Use code coverage to find holes in your test suites. Learn how to identify hard dependencies.

Discover what tools there are for unit testing in iOS, and how to work in a test-driven environment. This book reveals how testing is a crucial capability in any iOS developer's toolset, and a minimum requirement in iOS interviews.A few years ago, tests on mobile platforms were not very popular. It wasn't a technical constraint, more a cu...

You know you should be unit testing, so why aren't you doing it? If you're new to unit testing, if you find unit testing tedious, or if you're just not getting enough payoff for the effort you put into it, keep reading.The Art of Unit Testing, Second Edition guides you step by step from writing your first simple unit tests to building com...

Effective Unit Testing teaches Java developers how to write unit tests that are concise, expressive, useful, and maintainable. Offering crisp explanations and easy-to-absorb examples, it introduces emerging techniques like behavior-driven development and specification by example.Programmers who are already unit testing will learn the curr...

Testing Python is the most comprehensive book available on testing for one of the top software programming languages in the world. Python is a natural choice for new and experienced developers, and this hands-on resource is a much needed guide to enterprise-level testing development methodologies. The book will show you why Unit Testing a...

Unit Testing Principles, Patterns and Practices shows you how to refine your existing unit tests by implementing modern best practices. You'll learn to spot which tests are performing, which need refactoring, and which need to be deleted entirely! Upgrade your testing suite with new testing styles, good patterns, and reliable automated te...

As a highly extensible platform, Eclipse is used by everyone from independent software developers to NASA. Key to this is Eclipse's plug-in ecosystem, which allows applications to be developed in a modular architecture and extended through its use of plug-ins and features.Eclipse 4 Plug-in Development by Example Beginner's Guide takes the...