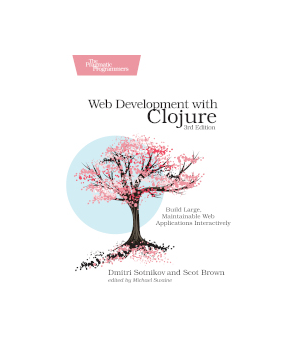 Today, developers are increasingly adopting Clojure as a web-development platform. See for yourself what makes Clojure so desirable, as you create a series of web apps of growing complexity, exploring the full process of web development using a modern functional language. This fully updated third edition reveals the changes in the rapidly evolving Clojure ecosystem and provides a practical, complete walkthrough of the Clojure web-stack.

Stop developing web apps with yesterday's tools. Today, developers are increasingly adopting Clojure as a web-development platform. See for yourself what makes Clojure so desirable, as you work hands-on and build a series of web apps of increasing size and scope, culminating in a professional grade web app using all the techniques you've learned along the way.

This fully updated third edition will get you up to speed on the changes in the rapidly evolving Clojure ecosystem - the many new libraries, tools, and best practices. Build a fully featured SPA app with re-frame, a popular front-end framework for ClojureScript supporting a functional style MVC approach for managing the UI state in Single-Page Application-style applications. Gain expertise in the popular Ring/Compojure stack using the Luminus framework. Learn how Clojure works with databases and speeds development of RESTful services. See why ClojureScript is rapidly becoming a popular front-end platform, and use ClojureScript with the popular re-frame library to build single-page applications.

Whether you're already familiar with Clojure or completely new to the language, you'll be able to write web applications with Clojure at a professional level.

If the usual patchwork of web development tools and languages just isn't cutting it for you, you need Web Development With Clojure. Clojure gives you the rich infrastructure of the JVM with the expressive power of a modern functional language. It combines excellent performance with rapid development--and you can exploit these virtues...

Web Development with Julia and Genie

Julia's high-performance and scalability characteristics and its extensive number of packages for visualizing data make it an excellent fit for developing web apps, web services, and web dashboards. The two parts of this book provide complete coverage to build your skills in web development.First, you'll refresh your knowledge o...