From Strings to Turing Machines 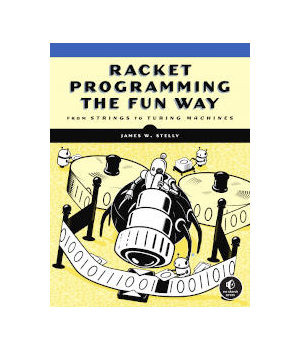 At last, a lively guided tour through all the features, functions, and applications of the Racket programming language. You'll learn a variety of coding paradigms, including iterative, object oriented, and logic programming; create interactive graphics, draw diagrams, and solve puzzles as you explore Racket through fun computer science topics - from statistical analysis to search algorithms, the Turing machine, and more.

Racket Programming the Fun Way is just like the language itself - an embodiment of everything that makes programming interesting and worthwhile, and that makes you a better programmer.

Probability and statistics are increasingly important in a huge range of professions. But many people use data in ways they don't even understand, meaning they aren't getting the most from it. Bayesian Statistics the Fun Way will change that.This book will give you a complete understanding of Bayesian statistics through simple explanation...

Java is the world's most popular programming language, but it's known for having a steep learning curve. Learn Java the Easy Way takes the chore out of learning Java with hands-on projects that will get you building real, functioning apps right away.You'll start by familiarizing yourself with JShell, Java's interactive command line shell ...

Functional programming offers useful techniques for building maintainable and scalable software that solves today's difficult problems. The demand for software written in this way is increasing - you don't want to miss out. In this book, you'll not only learn Elixir and its features, you'll also learn the mindset required to program funct...

Scala is a statically and strongly typed language that blends functional and object-oriented paradigms. It has experienced growing popularity as an appealing and pragmatic choice to write production-ready software in the functional paradigm. Scala and the functional programming paradigm enable you to solve problems with less code and lowe...

Learn Python Programming creates a foundation for those who are interested in developing their skills in Python programming. The book starts with the fundamentals of programming with Python and ends by exploring different topics such as GUIs and real-world apps.You will begin by exploring the foundations of and fundamental topics on Pytho...

The Joy of Clojure

If you've seen how dozens of lines of Java or Ruby can dissolve into just a few lines of Clojure, you'll know why the authors of this book call it a &quot;joyful language&quot;. Clojure is a dialect of Lisp that runs on the JVM. It combines the nice features of a scripting language with the powerful features of a production enviro...