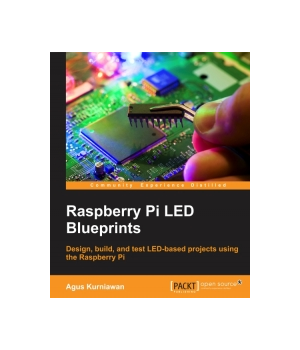 Blinking LED is a popular application when getting started in embedded development. By customizing and utilising LED-based modules into the Raspberry Pi board, exciting projects can be obtained. A countdown timer, a digital clock, a traffic light controller, and a remote light controller are a list of LED-based inspired project samples for Raspberry Pi.

An LED is a simple actuator device that displays lighting and can be controlled easily from a Raspberry Pi. This book will provide you with the ability to control LEDs from Raspberry Pi, starting from describing an idea through designing and implementing several projects based on LEDs, such as, 7-segments, 4-digits 7 segment, and dot matrix displays.

Beginning with step-by-step instructions on installation and configuration, this book can either be read from cover to cover or treated as an essential reference companion to your Raspberry Pi. Samples for the project application are provided such as a countdown timer, a digital clock, a traffic light controller, a remote light controller, and an LED-based Internet of Things, so you get more practice in the art of Raspberry Pi development.

The Raspberry Pi is one of the cheapest and most popular single-board computers, as such it has become a platform for users to create their own interesting hardware and software projects. It's capable of doing everything you'd expect a desktop computer to do, from browsing the Internet and playing high-definition videos, to maki...

The Raspberry Pi is loved the world over by educators and makers thanks to its tiny size and endless possibilities. Find out why it's loved and how to use it with the latest official Projects Book - we've managed to stuff the fifth edition with another 200 pages of inspiring projects, practical tutorials, and definitive reviews....

Get even more from Raspberry Pi with the brand-new official Handbook! Over 200 pages of Raspberry Pi packed with inspirational projects, essential tutorials & guides, practical tips and definitive reviews!Inside The Official Raspberry Pi Handbook 2022:- QuickStart guide to setting up your Raspberry Pi computer;- Updated with Raspberry...