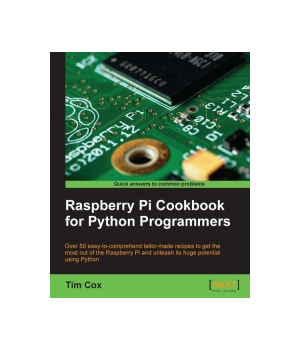 The Raspberry Pi foundation has been selling their computers since 2012 with the aim of inspiring programmers and engineers.

Raspberry Pi Cookbook for Python Programmers is a practical guide for getting the most out of this little computer. It will guide you through the many uses of the Raspberry Pi and allow you to showcase the best it has to offer. Discover what the Raspberry Pi has to offer using detailed Python 3 examples that you can adapt and extend; see where your creativity takes you!

Raspberry Pi Cookbook for Python Programmers begins by guiding you through setting up the Raspberry Pi, performing tasks using Python 3 and introduces the first steps to interface with electronics. As you work through each chapter you will build up your skills and knowledge and apply them as you progress throughout the book, delving further and further into the unique abilities and features of the Raspberry Pi.

Later, you will learn how to automate tasks by accessing files, build applications using the popular Tkinter library and create games by controlling graphics on screen. You will harness the power of the built-in graphics processor by using Pi3D to generate your own high quality 3D graphics and environments. Connect directly to the Raspberry Pi's hardware pins to control electronics from switching on LEDs and responding to push buttons right through to driving motors and servos. Learn how to monitor sensors to gather real-life data and use it to control other devices, and view the results over the Internet. Apply what you have learnt by creating your own Pi-Rover or Pi-Hexipod robots. Finally, we will explore using many of the purpose-built add-ons available for the Raspberry Pi, as well as interfacing with common household devices in new ways.

The Raspberry Pi Cookbook for Python Programmers will allow you to discover the vast range of abilities this micro-computer has. By following the clear examples you can pick up many new skills and arm yourself with the tools to create your own exciting and interesting projects.

The Raspberry Pi is an inexpensive, pocket-sized computer that will help you build and code your own hardware projects.Raspberry Pi Projects for Kids will show you how to harness the power of the Raspberry Pi to create 12 cool projects using simple code and common materials like a webcam, microphone, and LED lights. Step-by-step instructi...

Blinking LED is a popular application when getting started in embedded development. By customizing and utilising LED-based modules into the Raspberry Pi board, exciting projects can be obtained. A countdown timer, a digital clock, a traffic light controller, and a remote light controller are a list of LED-based inspired project samples fo...

Learn Raspberry Pi Programming with Python will show you how to program your nifty new $35 computer to make a web spider, a weather station, a media server, and more. You'll learn how to program in Python on your Raspberry Pi with hands-on examples and fun projects.Even if you're completely new to programming in general, you'll figure out...

Learn how to program your nifty new $35 computer to make a web spider, a weather station, a media server, and more. This book explores how to make a variety of fun and even useful projects, from a web bot to search and download files to a toy to drive your pets insane.Even if you're completely new to programming in general, you'll see how...

The Raspberry Pi is more than just a platform for teaching students how to program computers! The recipes in this book show you how this inexpensive computer can be used out of the box for a number of practical solutions that utilize existing networks and connectivity.The Raspberry Pi Networking Cookbook is an essential reference full of ...