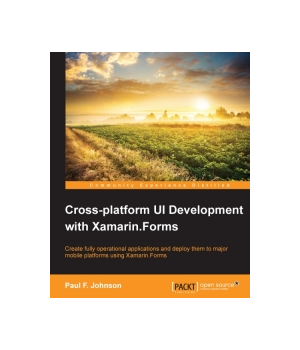 Xamarin is an IDE used for the development of native iOS, Android, and Windows, and cross-platform mobile applications in C#. For the mobile developer, that means learning three different languages to create the same application. Even if you use the Xamarin toolchain, you still need to work with three different user interface construction sets. Xamarin is essentially a container in which developers can write any application in C# and use the Xamarin compiler to package and deploy on Android, iOS, or Windows platforms. To top this, Xamarin.Forms plays the role of a single codebase for mobile applications.

This book will show you, with fully-coded examples, how to use both the Xamarin toolchain and the Xamarin.Forms library to code once for the three platforms. It goes from the concept and design of a mobile messenger application to its execution. You will be introduced to Messenger - the messaging app - which includes key features such as push notifications, UI, maps, databases, and web services.

Discover how to create cross platform apps for Android, iOS and UWP using Azure services and C# with Xamarin Forms. This book illustrates how to utilize Azure cloud storage for serving up Azure SQL DB data through Azure App Services.The book starts by setting up Xamarin and introducing Xamarin Forms and then covers the Azure Portal from a...

Learn to build a simple data-driven mobile game application using the power of Xamarin.Forms, ASP.NET, the Web API, and SignalR with this short book. In it you will build a cross-platform mobile application that targets both iOS and Android, connect your app with your database using Entity Framework, and implement real-time syncing functi...

Elegantly built GUI applications are always a massive hit among users. PySide is an open source software project that provides Python bindings for the Qt cross-platform UI framework. Combining the power of Qt and Python, PySide provides easy access to the Qt framework for Python developers and also acts as an excellent rapid application d...

Use Visual Studio App Center with Xamarin Forms to set up a DevOps CI/CD pipeline, set up your mobile builds on either iOS or Android, set up Android and Apple certificates and provisioning profiles, distribute your app to your developers and testers, capture analytics and crashes from your users, communicate to your users with push notif...

Build robust and a maintainable cross-platform mobile UI with Xamarin and C# 7This book will provide you with the knowledge and practical skills that are required to develop real-world Xamarin and Xamarin.Forms applications. You'll learn how to create native Android app that will interact with the device camera and photo gallery, and then...

Leverage Xamarin.Forms to build iOS and Android apps using a single, cross-platform approach. This book is the XAML companion to the C# guide Xamarin Mobile Application Development. You'll begin with an overview of Xamarin.Forms, then move on to an in-depth XAML (eXtensible Application Markup Language) primer covering syntax, namespaces, ...

Learn how to build app store-ready hybrid apps with the Ionic 2, the framework built on top of Apache Cordova (formerly PhoneGap) and Angular. This practical guide shows you how to use Ionic's tools and services to develop apps with HTML, CSS, and TypeScript, rather than rely on platform-specific solutions found in Android, iOS, and Windo...