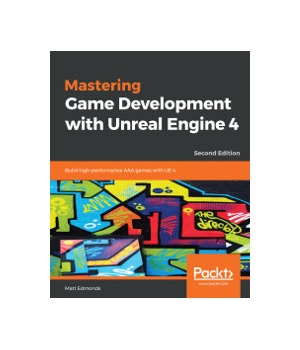 To make a basic combat game from scratch, you will quickly override existing UE4 classes, and add and implement simple C++ functions while running and building them. These are all discussed as a short summary for new developers and as a quick refresher for experienced developers. Next, you will build a combat player character with expanded controls, create logic for a character, swap weapons, attack and move, bridge over scene changes and transitions, retain data between scenes, and manage the scene-change process.

You will then build an intelligent enemy AI and add physics based particles for weapon impacts. You will also get acquainted with cutting-edge features such as Volumetric Lightmaps for precomputed lighting, and Atmospheric and Volumetric Fog, to build advanced visuals in our ongoing GitHub project.

Moving on, you will explore the tools required to build an in-game cut-scene for a more professional gameplay experience and story direction.

Along the way, you will implement a solid game UI, including writing a full in-game load and save system that will enable players to resume their game from any point. You will also prepare, build, and work on VR and AR taking them from editor to real-world, building two new projects one in each of these brand new areas of UE4 and integrate classes from the main project into AR!

By the end of the book, you will have mastered all major UE features and will be able to bring self-imagined games to life through Unreal Engine 4.18+.

Learning to program in C++ requires some serious motivation. Unreal Engine 4 (UE4) is a powerful C++ engine with a full range of features used to create top-notch, exciting games by AAA studios, making it the fun way to dive into learning C++17.This book starts by installing a code editor so you can begin to write C++17 code. You will the...

Unreal Engine 4 is a complete suite of game development tools that gives you power to develop your game and seamlessly deploy it to iOS and Android devices. It can be used for the development of simple 2D games or even stunning high-end visuals. Unreal Engine features a high degree of portability and is a tool used by many game developers...

Blueprints Visual Scripting for Unreal Engine is a step-by-step approach to building a fully functional game, one system at a time. Starting with a basic First Person Shooter template, each chapter will extend the prototype to create an increasingly complex and robust game experience. You will progress from creating basic shooting mechani...

Get started creating video games using Unreal Engine 4 (UE4) and learning the fundamentals of game development. Through hands-on, step-by-step tutorials, you will learn to design engaging environments and a build solid foundation for more complex games. Discover how to utilize the 3D game design software behind the development of immensel...

With the arrival of Unreal Engine 4, a new wonderful tool was born: Blueprint. This visual scripting tool allows even non-programmers to develop the logic for their games, allowing almost anyone to create entire games without the need to write a single line of code. The range of features you can access with Blueprint script is pretty exte...

Design and create video games using Java, with the LibGDX software library. By reading Beginning Java Game Development with LibGDX, you will learn how to design video game programs and how to build them in Java. You will be able to create your own 2D games, using various hardware for input (keyboard/mouse, gamepad controllers, or touchscr...