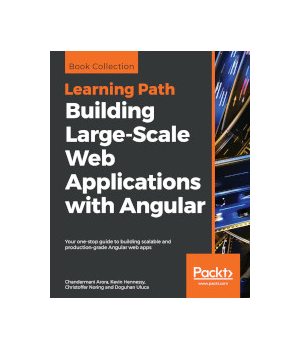 If you have been burnt by unreliable JavaScript frameworks before, you will be amazed by the maturity of the Angular platform. Angular enables you to build fast, efficient, and real-world web apps. In this Learning Path, you'll learn Angular and to deliver high-quality and production-grade Angular apps from design to deployment.

You will begin by creating a simple fitness app, using the building blocks of Angular, and make your final app, Personal Trainer, by morphing the workout app into a full-fledged personal workout builder and runner with an advanced directive building - the most fundamental and powerful feature of Angular.

You will learn the different ways of architecting Angular applications using RxJS, and some of the patterns that are involved in it. Later you'll be introduced to the router-first architecture, a seven-step approach to designing and developing mid-to-large line-of-business apps, along with popular recipes. By the end of this book, you will be familiar with the scope of web development using Angular, Swagger, and Docker, learning patterns and practices to be successful as an individual developer on the web or as a team in the Enterprise.

Managing the state of large-scale web applications is a highly challenging task with the need to align different components, backends, and web workers harmoniously. When it comes to Angular, you can use NgRx, which combines the simplicity of Redux with the reactive programming power of RxJS to build your application architecture, making ...

AngularJS is one of the most popular JavaScript frameworks used to write single page applications and is suitable for developing large-scale enterprise applications. With Firebase, you can easily store and sync data in real time. It has libraries for all the major web and mobile platforms (including AngularJS) and bindings for the most po...

Flask is a powerful web framework that helps you build great projects using your favorite tools. Flask takes the flexible Python programming language and provides a simple template for web development. Once imported into Python, Flask can be used to save time building web applications. It goes against the flow with the microframework conc...

Equip yourself with the skills required to create modern, progressive web applications that load quickly and efficiently. This fast-paced guide to server-side Angular leads you through an example application that uses Angular Universal to render application pages on the server, rather than the client.You'll learn how to serve your users v...

With ADF, Oracle gives you the chance to use the powerful tool used by Oracle's own developers. Modern enterprise applications must be user-friendly, visually attractive, and fast performing. Oracle Fusion Applications are just that; but to get the desired output you need proven methods to use this powerful and flexible tool to achieve su...

Build powerful and robust web applications with Apache MyFaces. Reduce coding by using sub-projects of MyFaces like Trinidad, Tobago, and Tomahawk. Update the content of your site daily with ease by using Facelets. Step-by-step and practical tutorial with lots of examples....

Why choose Erlang for web applications? Discover the answer hands-on by building a simple web service with this book. If you're an experienced web developer who knows basic Erlang, you'll learn how to work with REST, dynamic content, web sockets, and concurrency through several examples. In the process, you'll see first-hand that Erlang i...