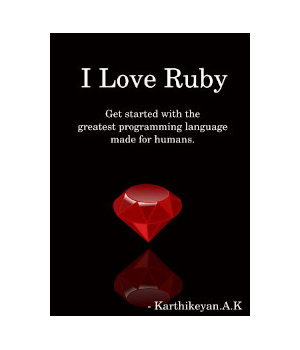 Ruby is an easy to learn programming language, it was invented by a guy named Matz in Japan. Ruby is a free software and can be used by any one for zero cost. Ruby's popularity was initially confined to Japan, later it slowly trickled out to rest of the world. Things changed with the emergence of Ruby on Rails which is a popular web-development framework written with Ruby.

Ruby Under a Microscope

Ruby is a powerful programming language with a focus on simplicity, but beneath its elegant syntax it performs countless unseen tasks.Ruby Under a Microscope gives you a hands-on look at Ruby's core, using extensive diagrams and thorough explanations to show you how Ruby is implemented (no C skills required). Author Pat Shaughnessy takes ...

The next step in the evolution of user interfaces is here. Chatbots let your users interact with your service in their own natural language. Use free and open source tools along with Ruby to build creative, useful, and unexpected interactions for users. Take advantage of the Lita framework's step-by-step implementation strategy to simplif...

Learn how the power and elegance of Ruby can make it easier to get enterprise-level applications to work together. See how Ruby can be used as the glue to combine applications in new ways, extending their lives and increasing their (and your) value to your company....

Sharpen your Ruby programming skills with twenty-five challenging problems from Ruby Quiz. Read the problems, work out a solution, and compare your solution with others. This book is a collection of highlights from the first year of Ruby Quiz challenges. Inside, you will find expanded content, all new solutions, and more in depth discussi...

What's all the buzz about this Ruby language? Is it right for you? Well, ask yourself: are you tired of all those extra declarations, keywords, and compilation steps in your other language? Do you want to be a more productive programmer? Then you'll love Ruby. With this unique hands-on learning experience, you'll discover how Ruby takes c...

You're still a little giddy from finally scoring your new iMac, and you can't wait to get started. Even if you're already in love with your iMac, it helps to have a little guidance to really get the most out of this ultimate all-in-one computer. This updated edition of iMac For Dummies is the ideal way to learn the iMac fundamentals from ...

If you're curious about how things work, this fun and intriguing guide will help you find real answers to everyday problems. By using fundamental math and doing simple programming with the Ruby and R languages, you'll learn how to model a problem and work toward a solution.All you need is a basic understanding of programming. After a quic...

Want to build native Mac OS X applications with a sleek, developer-friendly alternative to Objective-C? MacRuby is an ideal choice. This in-depth guide shows you how Apple's implementation of Ruby gives you access to all the features available to Objective-C programmers. You'll get clear, detailed explanations of MacRuby, including quick ...