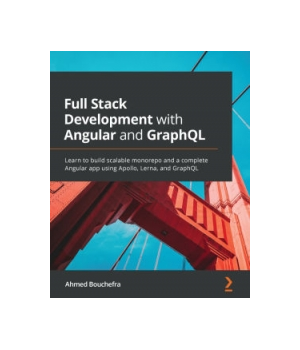 Angular is one of the most popular JavaScript frameworks in modern web app development allowing developers to not only build apps and reuse the code but also develop apps for any deployment target. For web, mobile web, native mobile, and native desktop, GraphQL is the modern and REST alternative for querying web APIs. Using Angular, TypeScript and GraphQL will give you a future-proof and scalable stack you can start building apps around.

This book shows you how to build apps using cutting-edge technologies. You'll learn how to solve common web development problems with GraphQL and Apollo, such as database access, authentication, and image uploads.

The book starts by introducing you to building full stack apps with Angular and GraphQL. Next, you'll learn how to create a monorepo project with Lerna and NPM Workspaces and configure a Node.js app to use GraphQL with Express and Apollo Server. You'll also understand the basics of Angular architecture and routing. Later, the book demonstrates how to build a professionally-looking UI with Angular Material, use Apollo Client to interface with the server to get data from the built GraphQL API.

You'll learn about Apollo Client's type and field policies, and various fetching policies. In addition to this, you'll learn about local state management and reactive variables with Apollo Client and how to generate TypeScript types and even Angular Apollo services for your GraphQL schema and queries using GraphQL Code Generator to implement a scalable codebase.

By the end of this book, you'll have the skills you need to be able to build your own full stack application.

JHipster is a development platform to generate, develop, and deploy Spring Boot and Angular / React applications and Spring microservices. It provides you with a variety of tools that will help you quickly build modern web applications. This book will be your guide to building full stack applications with Spring and Angular using the JHip...

Getting started with full stack development can be daunting. Even developers who are familiar with the best tools, such as Spring Boot and React, can struggle to nail the basics, let alone master the more advanced elements. If you're one of these developers, this comprehensive guide covers everything you need!This updated edition of ...

Making Swift an open-source language enabled it to share code between a native app and a server. Building a scalable and secure server backend opens up new possibilities, such as building an entire application written in one language - Swift.This book gives you a detailed walk-through of tasks such as developing a native shopping list app...

React has established itself as one of the most popular and widely adopted frameworks thanks to its simple yet scalable app development abilities. Quarkus comes across as a fantastic alternative for backend development by boosting developer productivity with features such as pre-built integrations, application services, and more that brin...

Getting MEAN with Mongo, Express, Angular, and Node, 2nd Edition

Getting MEAN, Second Edition teaches you how to develop full-stack web applications using the MEAN stack. This edition was completely revised and updated to cover MongoDB 4, Express 4, Angular 7, Node 11, and the latest mainstream release of JavaScript ES2015.Juggling languages mid-application can radically slow down a full-stack web proj...