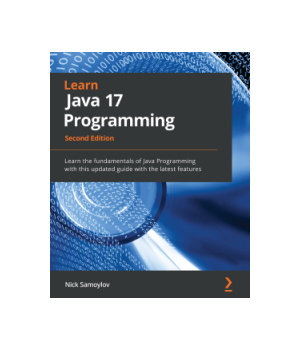 Java is one of the most preferred languages among developers. It is used in everything right from smartphones and game consoles to even supercomputers, and its new features simply add to the richness of the language.

This book on Java programming begins by helping you learn how to install the Java Development Kit. You'll then focus on understanding object-oriented programming (OOP), with exclusive insights into concepts such as abstraction, encapsulation, inheritance, and polymorphism, which will help you when programming for real-world apps. Next, you'll cover fundamental programming structures of Java such as data structures and algorithms that will serve as the building blocks for your apps with the help of sample programs and practice examples. You'll also delve into core programming topics that will assist you with error handling, debugging, and testing your apps. As you progress, you'll move on to advanced topics such as Java libraries, database management, and network programming and also build a sample project to help you understand the applications of these concepts.

By the end of this Java book, you'll not only have become well-versed with Java 17 but also gained a perspective into the future of this language and have the skills to code efficiently with best practices.

Learn the fundamentals of the Java 17 LTS or Java Standard Edition version 17 Long Term Support release, including basic programming concepts and the object-oriented fundamentals necessary at all levels of Java development. Authors Kishori Sharan and Adam L. Davis walk you through writing your first Java program step-by-step. Armed with t...

This unique in-depth tutorial shows you how to start developing rich-client desktop applications using your Java skills and provides comprehensive coverage of JavaFX 17's features. Each chapter starts with an introduction to the topic at hand, followed by a step-by-step discussion of the topic with small snippets of code. The book co...

Quickly find solutions to dozens of common programming problems encountered while building Java applications, with recipes presented in the popular problem-solution format. Look up the programming problem that you want to resolve. Read the solution. Apply the solution directly in your own code. Problem solved!Java 17 Recipes is updated to...

If you're new to ActionScript 3.0, or want to enhance your skill set, this bestselling book is the ideal guide. Designers, developers, and programmers alike will find Learning ActionScript 3.0 invaluable for navigating ActionScript 3.0's learning curve. You'll learn the language by getting a clear look at essential topics s...

Pro Java 8 Programming covers the core Java development kit and the finer points of the core standard edition (SE) and development kit version 8. You'll discover the particulars of working with the Java language and APIs to develop applications in many different contexts.You will also delve into more advanced topics like lambda expre...

The explosive growth of digital data has boosted the demand for expertise in trading strategies that use machine learning (ML). This thoroughly revised and expanded 2nd edition enables you to build and evaluate sophisticated supervised, unsupervised, and reinforcement learning models.This edition introduces end-to-end machine learning for...