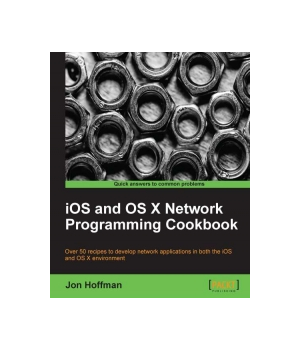 Darwin, which forms the core set of components for OS X and iOS, is compatible with the Single UNIX Specification Version 3 and POSIX UNIX. Therefore OS X and iOS are UNIX operating systems. While there are numerous books and articles written to teach network development in a UNIX environment there is surprisingly little dedicated to teaching network development specifically in an Apple environment. In this book we will be covering the standard UNIX networking stack with BSD Sockets as well as Apple's frameworks like CFNetworking and Bonjour.

iOS and OS X Network Programming Cookbook is an enthralling code-focused book on developing client and server applications for the iOS and OS X environments. You will learn how to integrate a number of Unix (BSD Sockets), Apple specific (CFNetworking, NSMutableURLRequest, Bonjour) and third party APIs (AFNetworking, MKNetworking) with your own apps.

As apps rapidly move into business and the cloud, iOS and OS X developers need new data management techniques. In Learning iCloud Data Management, renowned Apple database expert Jesse Feiler shows you how to use Apple's latest APIs and technologies to structure and synchronize all forms of data. Feiler helps you understand the issues, imp...

At their Worldwide Developer's conference (WWDC) in 2015, Apple announced Swift 2, a major update to the innovative programming language they first unveiled to the world the year before. Swift 2 features exciting enhancements to the original iteration of Swift, acting, as Apple put it themselves as "a successor to the C and Objective...

Learn Swift on the Mac

There's a new language in town. Swift is Apple's new, native, fast, and easy to learn programming language for iOS and OS X app development. It's their &quot;Objective-C without the C&quot;. If you are an iOS developer or planning to become one, learning Swift is your #1 priority, and Learn Swift on the Mac tells you everything yo...

Core Data expert Marcus Zarra walks you through a fully developed application based around the Core Data APIs. You'll build on this application throughout the book, learning key Core Data principles such as NSPredicate, NSFetchRequest, thread management, and memory management.Start with the basics of Core Data and learn how to use it to d...

This book highlights major aspects of network programming in Python starting from writing simple networking clients, to developing complex screen-scraping and network security monitoring scripts. It creates the building blocks for many practical web and networking applications that rely on various networking protocols. This book presents ...

Whether you're new to the Mac or a longtime user, this handy book is the quickest way to get up to speed on Snow Leopard. Packed with concise information in an easy-to-read format, Mac OS X Snow Leopard Pocket Guide covers what you need to know and is an ideal resource for problem-solving on the fly.This book goes right to the heart of Sn...