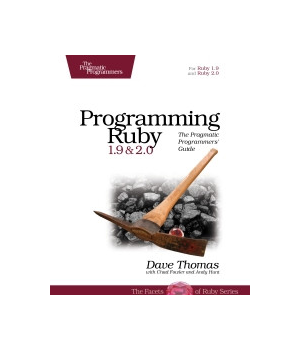 Would you like to go from first idea to working code much, much faster? Do you currently spend more time satisfying the compiler instead of your clients or end users? Are you frustrated with demanding languages that seem to get in your way, instead of getting the work done? Are you using Rails, and want to dig deeper into the underlying Ruby language? If so, then we've got a language and book for you!

Ruby is the fastest growing and most exciting dynamic language out there. If you need to get working programs delivered fast, you should add Ruby to your toolbox.This book is the only complete reference for Ruby 1.9, the very latest version of Ruby. (If you are still using Ruby 1.8, you'll want to check out the original PickAxe.)...

Web 2.0 makes headlines, but how does it make money? This concise guide explains what's different about Web 2.0 and how those differences can improve your company's bottom line. Whether you're an executive plotting the next move, a small business owner looking to expand, or an entrepreneur planning a startup, Web 2.0: A Strategy Guide ill...

OAuth 2.0 is a powerful authentication and authorization framework that has been adopted as a standard in the technical community. Proper use of this protocol will enable your application to interact with the world's most popular service providers, allowing you to leverage their world-class technologies in your own application. Want to lo...

This project-based guide will give you a sound understanding of Django 2.0 through three full-featured applications. It starts off by building a basic IMDB clone and adding users who can register, vote on their favorite movies, and upload associated pictures. You will learn how to use the votes that your users have cast to build a list of...

Rails just keeps on changing. Rails 3 and Ruby 1.9 bring hundreds of improvements, including new APIs and substantial performance enhancements. The fourth edition of this award-winning classic has been reorganized and refocused so it's more useful than ever before for developers new to Ruby and Rails.Rails 3 is a major release the changes...

Learn from F#'s inventor to become an expert in the latest version of this powerful programming language so you can seamlessly integrate functional, imperative, object-oriented, and query programming style flexibly and elegantly to solve any programming problem. Expert F# 4.0 will help you achieve unrivaled levels of programmer productivi...