A Gentle Introduction to Numerical Simulations with Python 3.6 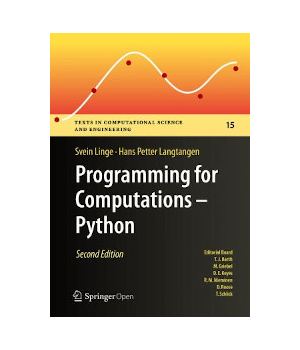 This book presents computer programming as a key method for solving mathematical problems. This second edition of the well-received book has been extensively revised: All code is now written in Python version 3.6 (no longer version 2.7). In addition, the two first chapters of the previous edition have been extended and split up into five new chapters, thus expanding the introduction to programming from 50 to 150 pages. Throughout the book, the explanations provided are now more detailed, previous examples have been modified, and new sections, examples and exercises have been added. Also, a number of small errors have been corrected.

The book outlines the shortest possible path from no previous experience with programming to a set of skills that allows students to write simple programs for solving common mathematical problems with numerical methods in the context of engineering and science courses. The emphasis is on generic algorithms, clean program design, the use of functions, and automatic tests for verification.

If you've ever spent hours renaming files or updating hundreds of spreadsheet cells, you know how tedious tasks like these can be. But what if you could have your computer do them for you?In this fully revised second edition of the best-selling classic Automate the Boring Stuff with Python, you'll learn how to use Python to writ...

Geospatial Analysis is used in almost every field you can think of from medicine, to defense, to farming. This book will guide you gently into this exciting and complex field. It walks you through the building blocks of geospatial analysis and how to apply them to influence decision making using the latest Python software.Learning Geospat...

Learn how to program your nifty new $35 computer to make a web spider, a weather station, a media server, and more. This book explores how to make a variety of fun and even useful projects, from a web bot to search and download files to a toy to drive your pets insane.Even if you're completely new to programming in general, you'...

Kivy - Interactive Applications and Games in Python 2nd Edition, will equip you with all the necessary knowledge to create interactive, responsive, and cross-platform applications and games.This book introduces the Kivy language and the necessary components so you can implement a graphical user interface (GUI) and learn techniques to hand...

Java Programming 24-Hour Trainer, 2nd Edition is your complete beginner's guide to the Java programming language, with easy-to-follow lessons and supplemental exercises that help you get up and running quickly. Step-by-step instruction walks you through the basics of object-oriented programming, syntax, interfaces, and more, before b...

Pro SQL Database for Windows Azure, 2nd Edition shows how to create enterprise-level database deployments without the usual investment in datacenter and other infrastructure. Take advantage instead of Microsoft's worldwide backbone for cloud computing that delivers all the power of SQL Server in the form of the cloud-based SQL Databa...

Linux and Solaris Recipes for Oracle DBAs, 2nd Edition is an example-based book on managing Oracle Database under Linux and Solaris. The book is written for database administrators who need to get work done and lack the luxury of curling up fireside with a stack of operating-system documentation. What this book provides instead is task-or...