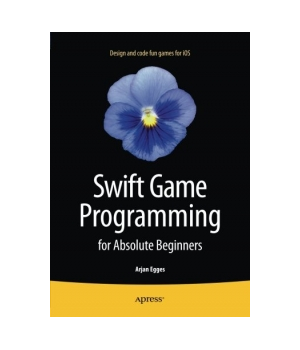 Swift Game Programming for Absolute Beginners teaches Apple's Swift language in the context of four, fun and colorful games. Learn the Swift 2.0 language, and learn to create game apps for iOS at the same time - a double win!

These four games are casual, arcade-style games representing the aim-and-shoot, casual, puzzle, and platform styles of game play. Professionally developed game assets form part of the book download. You'll get professionally drawn sprites and imagery that'll have you proud to show your learning to friends and family.

The approach in Swift Game Programming for Absolute Beginners follows the structure of a game rather than the syntax of a language. You'll learn to create game worlds, manage game objects and game states, define levels for players to pass through, implement animations based upon realistic physics, and much more. Along the way you'll learn the language, but always in the context of fun and games.

Swift OS X Programming for Absolute Beginners is your step-by-step guide to learning how to code using Swift, Apple's hottest new programming language. This book will not only teach complete programming novices how to write OS X programs, but it can also help experienced programmers moving to the Macintosh for the first time. You will lea...

Java 7 Programming for Absolute Beginners introduces the new core, open source Java Development Kit. Its focus is on practical knowledge and its completeness-it provides all the bits and pieces an utter novice needs to get started programming in Java. It seems as if everyone is writing applications or apps these days for Android, BlackBe...

Stay motivated and overcome obstacles while learning to use Swift Playgrounds to be a great iOS developer. This book is perfect for those with no programming background, those with some programming experience but no object-oriented experience, or those that have a great idea for an app but haven't programmed since school, and it is now up...

The professional development team that brought you two editions of Objective-C for the Absolute Beginners and have taught thousands of developers around the world to write some of the most popular iPhone apps in their categories on the app store, have now leveraged their instruction for Swift.Swift for Absolute Beginners is perfect for th...

Swift 2 for Absolute Beginners is perfect for those with no programming background, those with some programming experience but no object-oriented experience, or those that have a great idea for an app but haven't programmed since school, and it is now updated for Swift 2.Gary Bennett and Brad Lees are full-time professional iOS developers...

Learn Objective-C and its latest release, and learn how to mix Swift with it. You have a great idea for an app, but how do you bring it to fruition? With Objective-C, the universal language of iPhone, iPad, and Mac apps. Using a hands-on approach, you'll learn how to think in programming terms, how to use Objective-C to construct program ...

You have a great idea for an app, but where do you begin? Objective-C is the universal language of iPhone, iPad, and Mac apps, and Objective-C for Absolute Beginners, Second Edition starts you on the path to mastering this language and its latest release.Using a hands-on approach, you'll learn how to think in programming terms, how to use...

Learn how to get started with robotics programming using Robot Operation System (ROS). Targeted for absolute beginners in ROS, Linux, and Python, this short guide shows you how to build your own robotics projects.ROS is an open-source and flexible framework for writing robotics software. With a hands-on approach and sample projects, Robot...