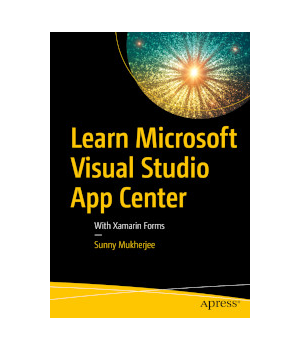 Use Visual Studio App Center with Xamarin Forms to set up a DevOps CI/CD pipeline, set up your mobile builds on either iOS or Android, set up Android and Apple certificates and provisioning profiles, distribute your app to your developers and testers, capture analytics and crashes from your users, communicate to your users with push notifications, and run UI tests on the Microsoft cloud. You will see how to automate and manage the life cycle of your apps through Microsoft's Cloud Service, with a focus on integrating App Center into your Xamarin Forms apps with clear, practical examples. As you follow along with the sample app, you will see how easy it is to configure your builds, to test the sample app on various iOS and Android devices on the App Center cloud, and to distribute your app to real devices.

Create a DevOps CI/CD pipeline for your mobile app on both iOS and Android devices; Save money without buying multiple iOS and Android devices and instead run cloud UI tests; Stay informed about build successes and failures by integrating App Center with Slack; Set up groups and add team members to your groups on App Center; Distribute your app to your team on either iOS or Android devices; Capture important user events in your code and report to App Center; Give a friendly user experience by handling crashes gracefully and reporting to App Center; Keep and analyze your user's data on Azure by setting up automatic data export to Azure; Communicate with your users using iOS and Android notification services from App Center; Give your users a better experience by sending silent push notifications; Include custom data in your push notifications.

Take a detailed look into Visual Studio - and learn practical techniques to help you work more efficiently. This fully revised and expanded version of Visual Studio Tips: 251 Ways to Improve Your Productivity includes a comprehensive collection of tips and shortcuts for working with the code editor, visual designers, searches, debugger, a...

ReSharper is one of the best tools that extends Microsoft Visual Studio. It adds a lot of features which increases a developer's productivity. It started with providing support for C# and VB.NET projects, but the current version supports developers in almost any type of applications which you can create with Visual Studio.This book explai...

Visual Studio 2013 is the premier tool for developers targeting the Microsoft platform. Learning how to effectively use this technology can enhance your productivity while simplifying your most common tasks, allowing you more time to focus on your project.Visual Studio 2013 Cookbook will introduce you to all the new areas of Visual Studio...

Get the hands-on, step-by-step guide to learning the latest enhancements in Microsoft Visual C# 2008. Visual C#, one of the tools in Microsoft Visual Studio 2008, is a modern programming language designed to deliver a productive environment for creating business frameworks and reusable object-oriented components. Whether you're a beginnin...

Teach yourself Visual C# 2010 - one step at a time. Ideal for developers with fundamental programming skills, this practical tutorial features learn-by-doing exercises that demonstrate how, when, and why to use the features of the C# rapid application development environment. You'll learn how to use Microsoft Visual Studio 2010 and Micros...

Visual Studio 2013 is one of the most sophisticated integrated development environments in the world today. With hundreds of features and several different editions available, it can be hard to learn your way around, and hard to know whether you're using it to its full potential. Visual Studio Condensed gives you a quick and systematic gu...