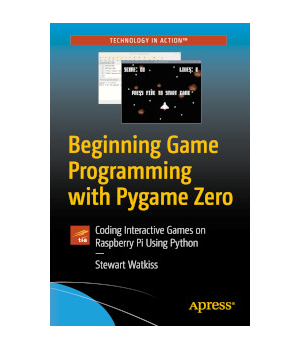 Make fun games while learning to code. Focused on making games rather than teaching programming theory, in this book you're more likely to see code on how gravity affects a missiles trajectory instead of the most efficient way to search through data. Even then the code is kept simple as games should be about playability rather than complex physics. There are links to the official documentation when you need to lookup information that isn't included in the book.

Start with a simple text based game to grasp the basics of programming in Python. Then moves on to creating simple graphical games in Pygame Zero. Not only will you learn object oriented programming to make it easier to make more complex games, you'll also work to create your own graphics and sounds. 3D graphics are a little complex. So we focus on 2D games, including spins on some classic boardgames and arcade games. All the games are designed to run on a Raspberry Pi. They will work on any Raspberry Pi, but will also work on any other computer that supports Python 3 along with Pygame Zero.

The games you make will be playable and hopefully fun to play. And by the end of the book, you can step beyond the provided source code to develop your own unique games and programs.

Like music and movies, video games are rapidly becoming an integral part of our lives. Over the years, you've yearned for every new gaming console, mastered each blockbuster within weeks after its release, and have even won a local gaming competition or two. But lately you've been spending a lot of time thinking about a game idea of your ...

Beginning Kinect Programming with the Microsoft Kinect SDK gets you up and running developing Kinect applications for your PC using Microsoft tools and the official SDK. You will have a working Kinect program by the end of the first chapter! The following chapters will open up the secrets of three-dimensional vision, skeleton tracking, au...

As the dominant mobile platform today, the Android OS is a powerful and flexible platform for mobile device. The new Android 7 release (New York Cheesecake) boasts significant new features and enhancements for both smartphone and tablet applications. This step-by-step resource takes a hands-on approach to teaching you how to create Androi...

HTML5 Game Programming with enchant.js gives first-time programmers of all ages the tools to turn their video game ideas into reality. A step-by-step guide to the free, open-source HTML5 and JavaScript engine enchant.js, it is ideally suited for game fans who have always wanted to make their own game but didn't know how. It begins with th...

Follow a walkthrough of the Unity Engine and learn important 2D-centric lessons in scripting, working with image assets, animations, cameras, collision detection, and state management. In addition to the fundamentals, you'll learn best practices, helpful game-architectural patterns, and how to customize Unity to suit your needs, all in th...

Designed for high-level game programming, UnrealScript is used in tandem with the Unreal Engine to provide a scripting language that is ideal for creating your very own unique gameplay experience. By learning how to replicate some of the advanced techniques used in today's modern games, you too can take your game to the next level and sta...