Build and Code Your Own Moving, Sensing, Thinking Robots 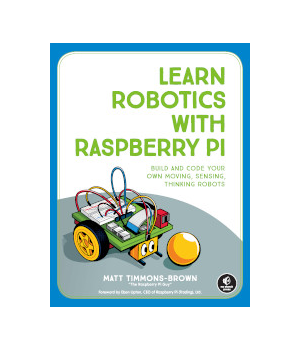 Learn Robotics with Raspberry Pi will take you from inexperienced maker to robot builder. You'll start off building a two-wheeled robot powered by a Raspberry Pi minicomputer and then program it using Python, the world's most popular programming language. Gradually, you'll improve your robot by adding increasingly advanced functionality until it can follow lines, avoid obstacles, and even recognize objects of a certain size and color using computer vision.

Learn how to: Control your robot remotely using only a Wii remote; Teach your robot to use sensors to avoid obstacles; Program your robot to follow a line autonomously; Customize your robot with LEDs and speakers to make it light up and play sounds; See what your robot sees with a Pi Camera.

As you work through the book, you'll learn fundamental electronics skills like how to wire up parts, use resistors and regulators, and determine how much power your robot needs. By the end, you'll have learned the basics of coding in Python and know enough about working with hardware like LEDs, motors, and sensors to expand your creations beyond simple robots.

Learning electronics can be tremendous fun - your first flashing LED circuit is a reason to celebrate! But where do you go from there, and how can you move into more challenging projects without spending a lot of money on proprietary kits? One excellent answer is Raspberry Pi.Raspberry Pi is everywhere, it's inexpensive, and it's a wonder...

Learn how to use a Raspberry Pi in conjunction with an Arduino to build a basic robot with advanced capabilities. Getting started in robotics does not have to be difficult. This book is an insightful and rewarding introduction to robotics and a catalyst for further directed study. You'll be led step by step through the process of building...

Raspberry Pi chose Python as its teaching language of choice to encourage a new generation of programmers to learn how to program. This approachable book serves as an ideal resource for anyone wanting to use Raspberry Pi to learn to program and helps you get started with the Python programming language. Aimed at first-time developers with...

Getting Started with Raspberry Pi

What can you do with the Raspberry Pi, a $35 computer the size of a credit card? All sorts of things! If you're learning how to program, or looking to build new electronic projects, this hands-on guide will show you just how valuable this flexible little platform can be.This book takes you step-by-step through many fun and educational pos...