Beyond the Basic Stuff with Python

Bookstore > Books > Beyond the Basic Stuff with Python 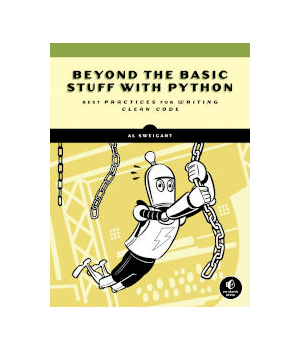 Welcome to Beyond the Basic Stuff with Python. More than a mere collection of advanced syntax and masterful tips for writing clean code, you'll learn how to advance your Python programming skills by using the command line and other professional tools like code formatters, type checkers, linters, and version control. Sweigart takes you through best practices for setting up your development environment, naming variables, and improving readability, then tackles documentation, organization and performance measurement, as well as object-oriented design and the Big-O algorithm analysis commonly used in coding interviews. The skills you learn will boost your ability to program - not just in Python but in any language.

You'll learn:
- Coding style, and how to use Python's Black auto-formatting tool for cleaner code;
- Common sources of bugs, and how to detect them with static analyzers;
- How to structure the files in your code projects with the Cookiecutter template tool;
- Functional programming techniques like lambda and higher-order functions;
- How to profile the speed of your code with Python's built-in timeit and cProfile modules;
- The computer science behind Big-O algorithm analysis;
- How to make your comments and docstrings informative, and how often to write them;
- How to create classes in object-oriented programming, and why they're used to organize code.

Toward the end of the book you'll read a detailed source-code breakdown of two classic command-line games, the Tower of Hanoi (a logic puzzle) and Four-in-a-Row (a two-player tile-dropping game), and a breakdown of how their code follows the book's best practices. You'll test your skills by implementing the program yourself.

Of course, no single book can make you a professional software developer. But Beyond the Basic Stuff with Python will get you further down that path and make you a better programmer in the process as you learn to write readable code that's easy to debug and perfectly Pythonic.

If you've ever spent hours renaming files or updating hundreds of spreadsheet cells, you know how tedious tasks like these can be. But what if you could have your computer do them for you?In this fully revised second edition of the best-selling classic Automate the Boring Stuff with Python, you'll learn how to use Python to writ...

Automate the Boring Stuff with Python

If you've ever spent hours renaming files or updating hundreds of spreadsheet cells, you know how tedious tasks like these can be. But what if you could have your computer do them for you?In Automate the Boring Stuff with Python, you'll learn how to use Python to write programs that do in minutes what would take you hours to do ...

Hear from these key Python thinkers about the current status of Python, and where it's heading in the future; Listen to their close thoughts on significant Python topics, such as Python's role in scientific computing, and machine learning; Understand the direction of Python, and what needs to change for Python 4.Each of these tw...

Computer Vision can reach consumers in various contexts via webcams, camera phones and gaming sensors like Kinect. OpenCV's Python bindings can help developers meet these consumer demands for applications that capture images, change their appearance and extract information from them, in a high-level language and in a standardized dat...

Bitcoin is a cryptocurrency that's changing the face of online payments. Hands-On Bitcoin Programming with Python teaches you to build software applications for mining and creating Bitcoins using Python.This book starts with the basics of both Bitcoin and blockchain and gives you an overview of these inherent concepts by showing you ...

Data structures allow you to store and organize data efficiently. They are critical to any problem, provide a complete solution, and act like reusable code. Hands-On Data Structures and Algorithms with Python teaches you the essential Python data structures and the most common algorithms for building easy and maintainable applications.Thi...

Zed Shaw has perfected the world's best system for becoming a truly effective Python 3.x developer. Follow it and you will succeed - just like the tens of millions of programmers he's already taught. You bring the discipline, commitment, and persistence; the author supplies everything else.In Learn Python 3 the Hard Way, Zed Sha...