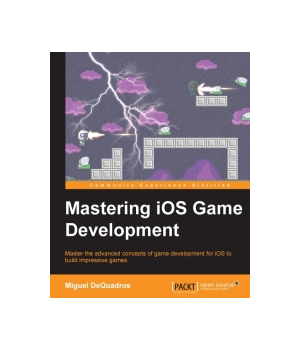 iOS is an operating system for Apple manufactured phones and tablets. Mobile gaming is one of the fastest-growing industries, and compatibility with iOS is now becoming the norm for game developers. SpriteKit is part of the native SDK from Apple, and enables developers to make simple entry into game development without unnecessary overhead and a long learning process. SpriteKit also provides other functionality that is useful for games, including basic sound playback support and physics simulation. In addition, Xcode provides built-in support for SpriteKit so that you can create complex special effects and texture atlases directly in Xcode. This combination of framework and tools makes SpriteKit a good choice for games and other apps that require similar kinds of animation.

Become a master in iOS game development through this fast and fun guide!

In the beginning, we'll tell you everything you need to plan and design your game. You'll then start developing your game through step-by-step instructions using the various built-in technologies of Xcode. From there on, we discuss how to deploy your game to the iOS App Store, as well as monetizing it to make more revenue. You will also learn advanced techniques to improve your game playing experience, including better multi-tasking, improved performance optimization, battery management, and more. To end the book off, we'll show you how to update your game with different features, then port the update to the App Store.

Want to build games with iOS technologies? This cookbook provides detailed recipes for a wide range of common iOS game-development issues, ranging from 2D and 3D math to Game Center integration, and OpenGL to performance. If you're familiar with iOS and Objective-C, this is the problem-solving guide you want.Rather than focus on specific ...

Ready to make amazing games for the iPhone, iPad, and iPod touch? With Apple's Swift programming language, it's never been easier. This updated cookbook provides detailed recipes for a managing wide range of common iOS game-development issues, ranging from 2D and 3D math to SpriteKit and OpenGL to performance - all revised for Swift.You g...

Ready to create amazing games for iOS? With Apple's Swift programming language, it's never been easier. This updated cookbook provides detailed recipes for managing a wide range of common iOS game-development issues, ranging from architecture design to graphics to performance - all revised for the latest version of Swift.You get simple, d...

Unity is an incredibly powerful and popular game creation tool, and Unity 4 brings even more great features, including Mechanim animation. Learn Unity 4 for iOS Game Development will show you how to use Unity with Xcode to create fun, imaginative 3D games for iPhone, iPad, and iPod touch. You'll learn how to optimize your game for both sp...

So you have a great game idea for iPhone or iPad, but Objective-C just seems a bit daunting. What are your alternatives? The App Store is very picky about languages, but there is hope: Lua is a versatile, lightweight, fast, and easy to learn language that you can use to build your iOS games and get them accepted into the App Store.Learn L...

Swift is the perfect choice for game development. Developers are intrigued by Swift and want to make use of new features to develop their best games yet. Packed with best practices and easy-to-use examples, this book leads you step by step through the development of your first Swift game.The book starts by introducing Swift's best feature...