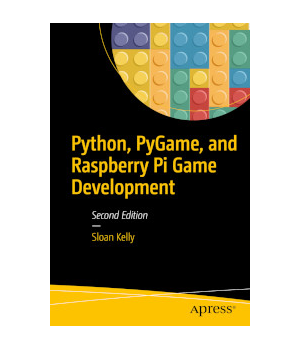 Expand your basic knowledge of Python and use PyGame to create fast-paced video games with great graphics and sounds. This second edition shows how you can integrate electronic components with your games using the build-in general purpose input/output (GPIO) pins and some Python code to create two new games.

You'll learn about object-oriented programming (OOP) as well as design patterns, such as model-view-controller (MVC) and finite-state machines (FSMs). Whether using Windows, macOS, Linux, or a Raspberry Pi, you can unleash the power of Python and PyGame to create great looking games.

The book also includes complete code listings and explanations for Bricks, Snake, and Invaders - three fully working games. These allow you to get started in making your own great games and then modify them or build your own exciting titles. The concepts are further explained using games such as Copycat, where the player must concentrate and repeat the sequence of lights and sounds, and Couch Quiz, in which PyGame and electronic components create a quiz game for 2-4 players.

Gain basic knowledge of Python and employ it for game development; Study game projects you can use as templates, such as Bricks, Snake, and Invaders; Work with user-defined functions, inheritance, composition, and aggregation; Implement finite state machines; Integrate your game with electronics using the GPIO pins.

With the release of the Raspberry Pi 2, a new series of the popular compact computer is available for you to build cheap, exciting projects and learn about programming.In this book, we explore Raspberry Pi 2's hardware through a number of projects in a variety of programming languages. We will start by exploring the various hardware compo...

As a developer, you always need to keep an eye out and be ready for what will be trending soon, while also focusing on what's trending currently. So, what's better than learning about the integration of the best of both worlds, the present and the future? Artificial Intelligence (AI) is widely regarded as the next big thing after mobile, ...

This book teaches you how to hook up your Raspberry Pi computer, install different games from a variety of genres, and set up emulators so you can play hundreds of classic arcade and console games. Moreover, you will also learn how to design, create, and play video games that you create from scratch.After learning how to set up a Raspberr...