Get Programming with Haskell

Bookstore > Books > Get Programming with Haskell 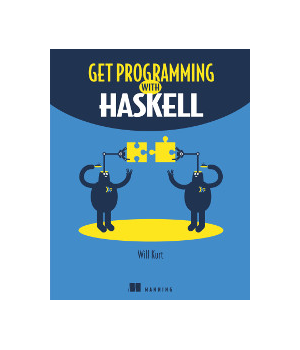 Get Programming with Haskell introduces you to the Haskell language without drowning you in academic jargon and heavy functional programming theory. By working through 43 easy-to-follow lessons, you'll learn Haskell the best possible way - by doing Haskell!

Programming languages often differ only around the edges - a few keywords, libraries, or platform choices. Haskell gives you an entirely new point of view. To the software pioneer Alan Kay a change in perspective can be worth 80 IQ points, and Haskellers agree on the dramatic benefits of thinking the Haskell way - thinking functionally, with type safety, mathematical certainty, and more. In this hands-on book, that's exactly what you'll learn to do.

Get Programming with Haskell leads you through short lessons, examples, and exercises designed to make Haskell your own. It has crystal-clear illustrations and guided practice. You will write and test dozens of interesting programs and dive into custom Haskell modules. You will gain a new perspective on programming plus the practical ability to use Haskell in the everyday world.

Get Programming with F#

Get Programming with F#: A guide for .NET Developers shows you how to upgrade your .NET development skills by adding a touch of functional programming in F#. In just 43 bite-sized chunks, you'll learn how to use F# to tackle the most common .NET programming tasks.Examples use the familiar Visual Studio environment, so you'll be instantly ...

Get Programming with JavaScript Next

Great code is readable, bug-free, and maintainable. Modern JavaScript, aka JavaScript Next, makes it much, much easier to write great applications. New features introduced in ES2015 simplify the structure of your JavaScript projects and radically streamline async-oriented tasks like writing reactive applications and microservices.Get Prog...

Get Programming with Node.js

Get Programming with Scala

Scala is a multi-style programming language for the JVM that supports both object-oriented and functional programming. Master Scala, and you'll be well-equipped to match your programming approach to the type of problem you're dealing with. Packed with examples and exercises, Get Programming with Scala is the perfect starting point for dev...

Getting Started with Haskell Data Analysis

Every business and organization that collects data is capable of tapping into its own data to gain insights how to improve. Haskell is a purely functional and lazy programming language, well-suited to handling large data analysis problems. This book will take you through the more difficult problems of data analysis in a hands-on manner.Th...