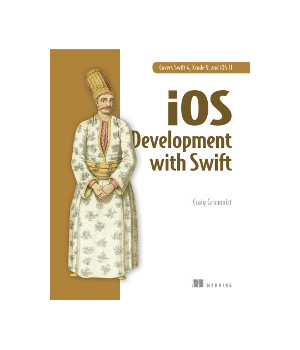 iOS Development with Swift is a hands-on guide to creating apps for iPhone and iPad using the Swift language. Inside, you'll be guided through every step of the process for building an app, from first idea to App Store. This book fully covers Swift 4, Xcode 9, and iOS 11.

One billion iPhone users are waiting for the next amazing app. It's time for you to build it! Apple's Swift language makes iOS development easier than ever, offering modern language features, seamless integration with all iOS libraries, and the top-notch Xcode development environment. And with this book, you'll get started fast.

iOS Development with Swift is a hands-on guide to creating iOS apps. It takes you through the experience of building an app - from idea to App Store. After setting up your dev environment, you'll learn the basics by experimenting in Swift playgrounds. Then you'll build a simple app layout, adding features like animations and UI widgets. Along the way, you'll retrieve, format, and display data; interact with the camera and other device features; and touch on cloud and networking basics.

Test-driven development (TDD) is a proven way to find software bugs early. Writing tests before your code improves the structure and maintainability of your app.Test-driven iOS Development with Swift will help you understand the process of TDD and how it impacts your applications written in Swift. Through practical, real-world examples, y...

Apple's new programming language, Swift, is fast, safe, accessible - the perfect choice for game development! Packed with best practices and easy-to-use examples, this book leads you step by step through the development of your first Swift game.The book starts by introducing Swift's best features for game development. Then, you will learn...

Acquire and master the information required to take you to the next level beyond basic iPhone development using Swift. In this follow up work to the best selling Beginning iPhone Development with Swift, you'll learn how to improve your apps by managing the performance of your programs using parallelization, getting data in and out of the ...

Want to build iOS 12 applications from scratch with the latest Swift 4.2 language and Xcode 10 by your side? Forget sifting through tutorials and blog posts; this book is a direct route to iOS development, taking you through the basics and showing you how to put principles into practice. Take advantage of this developer-friendly guide and...