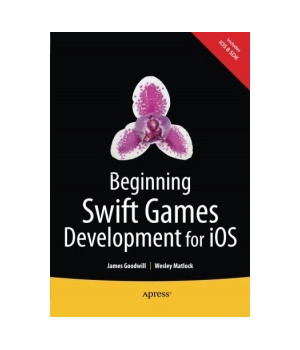 Game apps are one of the most popular categories in the Apple iTunes App Store. Well, the introduction of the new Swift programming language will make game development even more appealing and easier to existing and future iOS app developers. In response, James Goodwill, Wesley Matlock and Apress introduce you to this book, Beginning Swift Games Development for iOS. In this book, you'll learn the fundamental elements of the new Swift language as applied to game development for iOS.

In part 1, you'll start with a basic 2D game idea and build the game throughout the book introducing each SpriteKit topic as we add new functionality to the game. By the end of the book, you'll have experience with all the important SpriteKit topics and have a fully functional game as a result. In part 2 of this book, you'll learn 3D game development using Apple's SceneKit framework and the Swift programming language. And, you'll follow the same pattern we used for part 1.

After reading and using this book, you'll have the skills and the code to build your first 2D and then 3D game app that you can run on any iOS enabled device and perhaps sell in the Apple iTunes App Store.

So you have a great idea for an iPhone or iPad game, but you've never programmed before. Where to start? Here! With GameSalad, you can design, build, and publish a 2D game in the App Store using an easy-to-use, no-programming-required game creation tool.Learn GameSalad for iOS shows you how to set up your development environment and how t...

Create compelling 2D games with Learn cocos2d 2: Game Development with iOS. This book shows you how to use the powerful new cocos2d, version 2 game engine to develop games for iPhone and iPad with tilemaps, virtual joypads, Game Center, and more.Best of all, this book will have you making games right from the very start. It guides you ste...

Game apps on iPhone and now iPad remain one of the most popular type of apps in the Apple iTunes App Store. Does Angry Birds ring a bell? What you were once able to do just for the iPhone (and iPod touch) is now possible for the popular iPad, using the new iOS 5 SDK.Beginning iOS 5 Games Development provides a clear path for you to crea...

iOS is an operating system for Apple manufactured phones and tablets. Mobile gaming is one of the fastest-growing industries, and compatibility with iOS is now becoming the norm for game developers. SpriteKit is part of the native SDK from Apple, and enables developers to make simple entry into game development without unnecessary overhea...

Ready to create amazing games for iOS? With Apple's Swift programming language, it's never been easier. This updated cookbook provides detailed recipes for managing a wide range of common iOS game-development issues, ranging from architecture design to graphics to performance - all revised for the latest version of Swift.You get simple, d...

Game apps on iPhone and now The New iPad remain one of the most popular type of apps in the Apple iTunes App Store. Does Angry Birds ring a bell? Now, you can learn to build game apps for the iPhone 5 and The New iPad using the new iOS 6 SDK.Beginning iOS 6 Games Development provides a clear path for you to learn and create iPhone and iP...