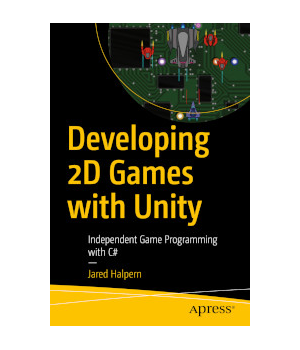 Follow a walkthrough of the Unity Engine and learn important 2D-centric lessons in scripting, working with image assets, animations, cameras, collision detection, and state management. In addition to the fundamentals, you'll learn best practices, helpful game-architectural patterns, and how to customize Unity to suit your needs, all in the context of building a working 2D game.

While many books focus on 3D game creation with Unity, the easiest market for an independent developer to thrive in is 2D games. 2D games are generally cheaper to produce, more feasible for small teams, and more likely to be completed. If you live and breathe games and want to create them then 2D games are a great place to start.

New all-digital channels for distribution, such as Nintendo eShop, XBox Live Marketplace, the Playstation Store, the App Store, Google Play, itch.io, Steam, and GOG.com have made it easier than ever to discover, buy, and sell games. The golden age of independent gaming is upon us, and there has never been a better time to get creative, roll up your sleeves, and build that game you've always dreamed about. Developing 2D Games with Unity can show you the way.

Prepare yourself to travel back to the 90s and build a game like they used to make, using today's technology. That's right; we're talking about making 2D games using Unity!This book will help you build 2D games in Unity using the engine's 2D technologies added in Version 4.3. You'll learn the basics of importing a...

Understand what makes Unity the world's most widely used real-time 3D development platform and explore its powerful features for creating 3D and 2D games, as well as the Unity game engine and the Microsoft Game Dev, including the Microsoft Azure Cloud and Microsoft Azure PlayFab services, to create games.You will start by getting acq...

Moai SDK is a fast, minimalist, open-source Lua mobile framework for pro game developers. Moai is built around Lua, a common programming language for games, and offers a single open-source platform for both the front-end elements seen by consumers and the back-end infrastructure.Developing Mobile Games with Moai SDK will guide you through...

For the absolute beginner to any concept of programming, writing a script can appear to be an impossible hurdle to overcome. The truth is, there are only three simple concepts to understand: 1) having some type of information; 2) using the information; and 3) communicating the information. Each of these concepts is very simple and extreme...

Unity is a powerful game development engine that provides rich functionalities to create 2D and 3D games.Unity 2D Game Development Cookbook is a practical guide to creating games with Unity. The book aims to serve the purpose of exploring problematic concepts in Unity for 2D game development, offering over 50 recipes that are easy to unde...

Unity is a fully integrated development engine providing the required functionality to create games and interactive 3D content, while reducing the time, effort, and cost of developing the content. Nowadays, many people have started to use Unity in an eLearning setting as it allows them to create real-world scenarios, or models, for traini...

Getting Started with Clickteam Fusion

SFML is a cross-platform, object-oriented multimedia API that is written in C++. It provides a simple interface to ease the development of games and multimedia applications.This book will guide you through everything you need to know about building a 2D game in SFML. Concepts such as Sprites, Textures, Animation, and Cameras are explored ...