Developing Games on the Raspberry Pi

App Programming with Lua and LOVE 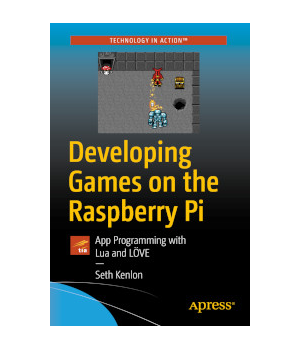 Learn to set up a Pi-based game development environment, and then develop a game with Lua, a popular scripting language used in major game frameworks like Unreal Engine (BioShock Infinite), CryEngine (Far Cry series), Diesel (Payday: The Heist), Silent Storm Engine (Heroes of Might and Magic V) and many others. More importantly, learn how to dig deeper into programming languages to find and understand new functions, frameworks, and languages to utilize in your games.

You'll start by learning your way around the Raspberry Pi. Then you'll quickly dive into learning game development with an industry-standard and scalable language. After reading this book, you'll have the ability to write your own games on a Raspberry Pi, and deliver those games to Linux, Mac, Windows, iOS, and Android. And you'll learn how to publish your games to popular marketplaces for those desktop and mobile platforms.

Whether you're new to programming or whether you've already published to markets like Itch.io or Steam, this book showcases compelling reasons to use the Raspberry Pi for game development. Use Developing Games on the Raspberry Pi as your guide to ensure that your game plays on computers both old and new, desktop or mobile.

Confidently write programs in Lua and the LOVE game engine on the Raspberry Pi; Research and learn new libraries, methods, and frameworks for more advanced programming; Write, package, and sell apps for mobile platforms; Deliver your games on multiple platforms.

This book teaches you how to hook up your Raspberry Pi computer, install different games from a variety of genres, and set up emulators so you can play hundreds of classic arcade and console games. Moreover, you will also learn how to design, create, and play video games that you create from scratch.After learning how to set up a Raspberr...

Blinking LED is a popular application when getting started in embedded development. By customizing and utilising LED-based modules into the Raspberry Pi board, exciting projects can be obtained. A countdown timer, a digital clock, a traffic light controller, and a remote light controller are a list of LED-based inspired project samples fo...